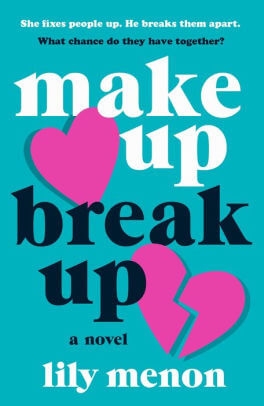 inoffensive, and straight forward romance that theoretically succeeds in combining the tech world with the true essence of love.

What begins in the present tense with our protagonist Annika fighting for the survival of her business ‘Make up’, soon back peddles to detail in bits and bobs of the hot encounter in Vegas she shared with her arch nemesis and business rival Hudson Craft – who, by all accounts, is making a killing on the app scene. Unfortunately however, it appears that after their week long smooch tryst in Vegas, both have come away with an entirely different perspective and bunch of assumptions of their 7 days together. This included a binary app that Annika believes whole heartedly is fraudulent, claiming Hudson has pretty much stolen her bright ideas, using her creativity whilst vulnerable to launch his huge success.

To make matters a little more interesting, a new neighbour down the business hall moves in, and on the cold heals of a cranky bank manager ready to usurp her, Annika is horrified to find, Hudson and his Break Up team have literally moved in on her floor. From go to wo, Annika is hell bent on one-upping her rival and like all Type A romances, it doesn’t require a hard read between the lines to determine the frenetic toxic chemistry between the two is actually more frenetic and chemistry then it is toxic.

Whilst likeable enough, in the sense that Annika had a clear moral if not idealistic purpose, there were some interesting incongruities in her dialogue that wore a little thin midway through the book. Raised as an only child by her father, Annika was largely shaped by the death of her mother as a toddler, and the love her father had for her despite him being hell bent on her choosing a career in medicine which ran counter to her dreams. Sadly for Annika though, studying medicine wasn’t in her plan, or indeed dialogue, and at times her inherent motivations just weren’t intelligent enough to warrant this complication. Her childhood boss backstory didn’t ring as genuine in the day to day operational world of her business or work ethic, and this was evidenced in the fact that there didn’t seem to be a lot going on beyond 6 months work on a 10 minute pitch. This was a little bothersome, particularly when her inner monologue and character structure was entirely about work, ambition and doing everything she could to ensure ‘Make Up’ reached out to all of the couples who need a helping hand.

On the upside, Hudson was incredibly hot and for the most part a consistently drawn character who had admirable traits. By far, he was the winning element, alongside the side characters who served to give form and shape to Annika’s world. Summarily, this is a relatively entertaining read that is appropriately contemporary which will no doubt hit the gong on those who love a career based romance that finds a perfect Happily Every After.

Love, romance, second chances, fairy-tale endings…these are the things Annika Dev believes in. Her app, Make Up, has been called the “Google Translate for failing relationships.”

Which wouldn’t be a problem if they’d gone their separate ways after that summer fling in Las Vegas, never to see each other again. Unfortunately for Annika, Hudson’s moving not just into her office building, but into the office right next to hers. And he’ll be competing at the prestigious EPIC investment pitch contest: A contest Annika needs to win if she wants to keep Make Up afloat. As if it’s not bad enough seeing his irritatingly perfect face on magazine covers when her own business is failing. As if knowing he stole her idea and twisted it into something vile—and monumentally more successful—didn’t already make her stomach churn.

As the two rival app developers clash again and again—and again—Annika finds herself drawn into Hudson Craft’s fast-paced, high velocity, utterly shallow world. Only, from up close, he doesn’t seem all that shallow. Could it be that everything she thought about Hudson is completely wrong? Could the creator of Break Up teach her what true love’s really about?

« REVIEW: Back in the Texan’s Bed by Naima Simone
REVIEW: First Comes Like by Alisha Rai »
Comments are closed.