In Marriage to Merger by Addison Fox:  Mayson is an independent, successful business woman. She and her sisters have turned around the family’s magazine business, making it into a success. Maysn is happy with her life, but on the night of her sister’s wedding, she starts to feel like something is missing. She’s not sure what, but she has that feeling. When Mayson runs into Holt, a late wedding guest, in the hotel lobby, sparks fly! Before the night is through they are heating up the sheets with a lot so much passion it steams off the pages! 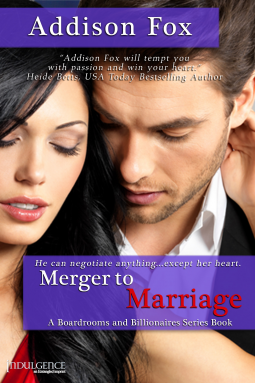 After that night, neither can stop thinking about the other…but Mayson didn’t tell Holt who she really was so he has no way to reconnect with her. In a great turn of events, they meet up again at a weekend house party. The unexpected bond and feelings they both have are still strong, especially physically! But Mayson has something she has to tell Holt about their night together that will either push them apart or bring them closer together…

Holt has never had a desire for a long term relationship and what he feels for Mayson after her revalation leaves him confused but at the same time nervously happy. He’s not sure what the right thing for him to do is, and he seems to have some trouble defining his feelings to himself and to Mayson! Mayson knows what she wants and doesn’t want. She does not want a relationship based on business. She doesn’t want to get trapped into a relationship or marriage like her mother did. After seeing her sister and her new husband together she knows love is out there, and that is what she wants!

“She couldn’t be in love with Holt Turner, couldn’t even give it room to take root in her mind. Love wasn’t a business meeting. It wasn’t a merger. It wasn’t rationale. What she had with Holt wasall of those things, not love. It couldn’t be.”

Holt has not had the best childhood. The issues and bad feelings from that have followed him into adult life, and he’s still having trouble dealing with them…especially when those old hidden problems threaten to become more and more visibe. He needs to be able to deal with it before he can move forward and have with Mayson what deep down they both already feel and want. Both Mayson and Holt really need to decide what is right for them and how to move forward from here. Will it be together or separately? Do either of them have room in their busy lifes for an emotional attachment? Do they want that?

I really liked both Mayson and Holt in Marriage to Merger. Addison gives us two very strong characters, but they work well together. Both of them are honest, driven, and open with each other. Holt knew he had to be honest with Mayson, and as hard as it was for him he was. He really wants to do the right thing and take care of Mayson, but has a hard time with his feelings. Mayson is used to being so independent and she definitely does not want someone to take care of her, but at the same time she wasn’t a bitch about it and really saw things from Holt’s point of view. It will be great to see if their one night stand moves on to a relationship!

I would have liked to know a bit more about Mayson’s younger sister and the story with her and her husband. We got a general idea and I think this could be another story all together!

Addison gives us a straight forward (and by that I mean I love that the characters are mature enough that they don’t play games with each other or keep secrets) romance that has lots of passion with Merger to Marriage. What started out as a one night stand could lead to a lot more, Holt and Mayson had an immediate connection with each other even then!

Publisher: Entangled: Indulgence (May 13, 2013)
One night of passion…
Mayson McBride has spent the last decade restoring her family’s magazine empire with her two sisters. She loves what she does,  but she can’t shake the feeling something’s missing. Which is why she jumps at the chance–incognito–for a single night of no-strings-attached sex  with Holt Turner.
A once in a lifetime connection…
Holt’s been unable to forget the woman he shared one night of explosive passion, and he’s thrilled to get reacquainted with her at a weekend house party. What he doesn’t expect are the immediate feelings of need and desire–emotions he keeps firmly in check–upon their reunion.
A forever commitment…
When Mayson and Holt’s single night together leads to unexpected consequences, both must decide what matters most. Especially when a threat from Holt’s past promises to ruin their relationship before it’s barely begun.

« REVIEW: Thinking of You by Jill Mansell
REVIEW: Feel the Heat by Kate Meader »

One Response to “REVIEW: Marriage to Merger by Addison Fox”