In Meant to Be by Terri Osburn, Beth Chandler is about to meet her future in-laws for the first time. But to do so, she must face her fear of boats and make the ferry ride alone to Anchor Island. She had planned on her fiance Lucas Dempsey being there for moral support. Unfortunately he was called back to his law firm to work on an issue with a case, therefore leaving Beth on her own. She was in the midst of an anxiety attack when Joe and his dog Dozer were making their way across the ferry and stopped to help. During their conversation she inadvertently finds out that this incredibly hot guy will 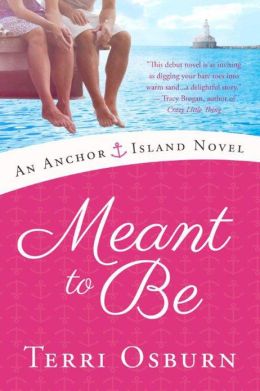 not only be her brother-in-law, but he thinks his brother has probably chosen a bubbly blonde for a fiance. Which couldn’t be further from the truth. Beth doesn’t dare admit who she is to Joe and hopes that once they are formally introduced at his parent’s house, they can laugh at the situation and be friends.

“She was alone, with her future in-laws on a tiny island surrounded by water and boats. The only element missing from her childhood nightmares was the boogeyman.”

Beth is welcomed with open arms by Lucas’ parents. But she can’t say the same for Joe. He makes it well known that he is not impressed with her and sets out to make things difficult for Beth. Matters get a bit more complicated with Joe living next door to his parents and working nights at their bar. Everywhere she goes, she has to put up with his crankiness. Finally he begins to relax around her, only for Beth to realize she should have been careful what she wished for. Before long she has to admit to herself she is completely head over heels for Joe and figure out what to do with that knowledge.

“…but when she smiled like that, like she actually like him, her face softened and her eyes glowed. Like lightning bugs dancing over the water on a warm spring night. Good God. He’d just compared her eyes to lightning bugs. Next he’d be writing love notes and drawing little hearts over the i’s.”

Joe Dempsey loves life on the island. He loves the simplicity of it all. But his life is about to become complicated when he meets his brother’s fiance for the first time. He is instantly attracted to the anxiety ridden brunette on the ferry but ends up insulting her without even knowing it. Sparks are still flying even when he realizes who she is on her first night at his parent’s house, which just winds up making him angry. No matter what he does, he can’t get Beth out of his mind, even though he knows she’s off limits. He would never intentionally hurt Lucas if he could help it. Joe ignores the warnings from his dad and his friends to be careful around Beth when they notice the tension between them. By the time he figures out his resolve isn’t as strong as he thinks it is, he may have driven away the love of his life and ruined his relationship with his brother.
Meant to Be by Terri Osburn is a heartfelt romance about meeting the right person at the wrong time. Beth and Joe can’t help their attraction and although they try to deny it, some feelings are too strong to ignore. This wasn’t really a traditional love triangle in which the female runs back and forth trying to make up her mind who she loves. Beth knows she’s about to make a mistake marrying the wrong brother and sees no way out of the situation without hurting everyone involved. I really liked Terri’s writing style and how well defined the characters were. She let their individual personalities shine which made for a very enjoyable story.

Beth Chandler has spent her whole life pleasing others. She went to law school to make her grandparents happy. She agreed to marry her workaholic boyfriend, Lucas, to make him happy. And, despite her fear of boats, she took a ferry to see Lucas’s parents just to make them happy.

While suffering through a panic attack on the ferry, Beth meets a tall, sexy stranger who talks her down from her fear—and makes her heart flutter in the process. Soon, she has a new reason to panic: her gorgeous, blue-eyed rescuer is Lucas’s brother, Joe. But could she ever leave her fiancé for his own brother…even if Lucas is more focused on making partner than on making their relationship work…and even if Joe turns out to be everything she never knew she wanted?

Filled with excitement and delight, Meant to Be is the story of a young woman torn between urban pressures and small-town pleasures.

2 Responses to “REVIEW: Meant to Be by Terri Osburn”