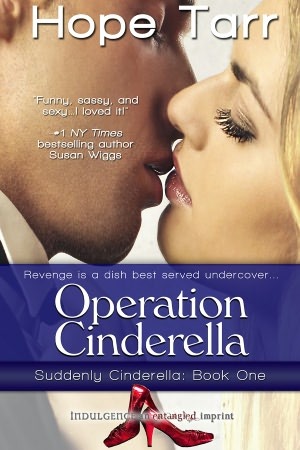 Manhattan magazine editor Macie Graham always gets her story—and she’ll do anything to uncover the dirt on famous radio personality Ross Mannon. After he smears her article on his show, nearly costing Macie her job, she devises a plan to masquerade as a modern-day Cinderella and get her revenge on the infuriating Texan.

All Ross wants is a woman with old-fashioned values to be his housekeeper and role model for his troubled teenage daughter. When the perfect woman shows up, Ross is relieved—until he finds himself drawn to his gorgeous, red-stiletto-wearing new employee. “Martha Jane” is opinionated and sexy, and Ross is intrigued…and more than a little turned on.

Macie thought Operation Cinderella was foolproof, but Ross, with his rugged good looks and southern charm, proves to be as perfect behind-the-scenes as he does in public. But when she finally uncovers a secret that could destroy Ross’s reputation, she faces losing her job or losing the fairy-tale ending she didn’t even know she wanted.

A fairy tale romance with a modern view and human twists.

Macie Graham is always after the best story. But her last article was smeared by famous radio personality Ross Mannon. Now seeking revenge she will go under what she calls Operation Cinderella and dig up dirt on him.

Ross is a very conservative person with very high standards and opinion about how people should think and live. The article he found by Macie on On Top magazine was about an issue that he does not agree with at all.

After Macie meets Ross while applying for the job as his housekeeper and helper with his teenage daughter, he thinks he has met the perfect woman. But little does he know that she stands for everything that he despises and that she is after his ruin, since he nearly made her lose her job after his Ross’s Rant show where the magazine lost a major sponsor. Now as they both think they have the discovered the perfect person they could fall in love with they must face the past and their own mistakes if they want to have a HEA.

I really liked this book because like any fairy tale it has a moral. To me it was like the saying, don’t judge a book by its cover. While it may seem that both Macie and Ross are a certain way that may seem like they don’t care about others, there is a reason for the way they think and act. And if you look a little deeper you may understand them better.

The epilogue is a total cliffhanger for future books about other characters in this story, which now I can’t wait for them to be released so I can read them. Sounds like more fun ahead. ☺

« Review: Newborn Baby For Christmas by Fiona Lowe
Review: Under Her Spell by Eliza Daly »