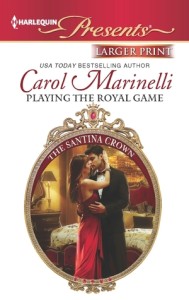 STOP THE PRESS: THE SANTINA-JACKSON ROYAL FAIRY TALE-FACT OR FICTION?

It seemed like every girl’s dream: fall in love with a prince and be whisked off for your very own glamorous happy-ever-after-a royal fairy tale for Allegra Jackson and Prince Alessandro Santina.

Allegra’s headline-grabbing family hardly prepared  her for a life of public duty, and sinfully delicious  Prince Alessandro has always seemed virtually  allergic to the idea of settling down in Santa Maria.

Out of all the flamboyant, beautiful women his name’s been linked with, the heir to the throne picked ordinary Allegra with the family from hell….

Is everything really as it seems regarding the tabloid’s engagement of the year?

Playing the Royal Game by Carol Marinelli was a well-written conclusion to the Santina Crown Series.

In this book we finally get an insight into Allegra Jackson and Alessandro Santina’s hasty engagement and their relationship.

I really liked the way this book started out and way it ended…. The middle parts I felt was lacking a bit of romance and intimacy between the H/h as the story progressed.…At times Alessandro came off a bit cold and disconnected.

What I Loved about this book were the extended Epilogues, which provide an update on all the couples from the Santina Crown series after they each got their HEA.

« Review: Defying the Prince by Sarah Morgan
Review: Lean On Me by HelenKay Dimon »
Comments are closed.