Prince of Secrets by Lucy Monroe: Demyan Zaretsky is considered a Prince by the King of Volyarus, his ‘Father of the heart’. The title is honorary, but it comes with real obligations, as Demyan discovers. The King informs him that the economic future of the country is at risk because the money that has been used to fortify infrastructure belongs to a Tanner. 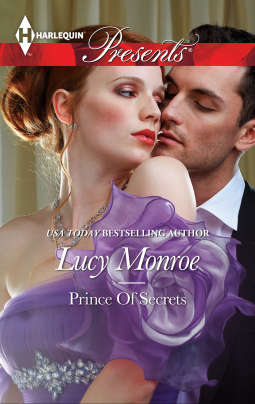 Chanel Tanner lost her father and grandfather in a laboratory accident, but that didn’t deter her from becoming a consummate scientist. She’d always known it was her calling, even if her mother preferred that she become a socialite. Chanel knew of the connection between Volyarus and her family, but believed – just like almost everyone – that her grandfather had left his shares of the country’s company to the people of Volyarus.

In order to secure Volyarus’ future, Demyan agrees to meet and marry Chanel. While he isn’t convinced this is morally right, he feels obligated to at least try because he wishes to help the King and Volyarus – both of which he loves.

The two meet, and while Demyan holds true to his personal code of ethics – which are to never lie to the woman he intends to marry – he doesn’t give away any of the secrets he holds about his background. When he finds out about Chanel’s lack of experience and naïveté, he questions the plan, but cannot bring himself to abandon it. For even though this would be the thing that will ‘seal the deal’, he actually finds himself warming to Chanel.

He comes to realize that he wants to give Chanel a real marriage – or at least real in that he will honor the love that she gives to him, and remain faithful for the rest of his life. He promises Oxana (the Queen) that he will never profess his love to Chanel if he doesn’t feel it.

Chanel is awkward and has huge family issues, but there is a bond between her and her half-siblings even though the relationship with her parents is strained. When she allows Demyan to meet her family, it prompts her mother and stepfather to take action and become closer to her. Her mother realizes the reasons she pushed away her daughter had damaged their relationship, and her stepfather was jealous of her similarity to her father.

Demyan has issues with his family as well, since his parents essentially abandoned him in order to gain favor with the King and Queen. He was only a commodity to them, while the ruling family showed him the love he lost from his birth parents. Chanel and Demyan come together, and figure out that they are getting married for all the right reasons after all.

I have to admit, while the story was intriguing, it was quite convoluted and almost too detailed. The first couple of chapters dealt with the situation in Volyarus and contained the couple’s first three dates. The ‘romance’ was a very small part of that – and it really should’ve been the other way around.

I never really connected with any of the characters besides Oxana. They seemed kind of mechanical and emotionless, and it was difficult to believe the Hero & Heroine had any kind of bond. That being said, the author’s writing was impeccable even though the details were intracate, and the story was interesting enough to keep me reading.

Prince Demyan Zaretsky does whatever it takes to protect his country. So seducing Chanel Tanner will be easy. And marriage? An unfortunate side effect of duty. She unwittingly holds the economic stability of Volyarus in her hands…and he must secure it.

With his royal identity and intent disguised, Demyan sets about a ruthless seduction designed to make Chanel lose her mind with ecstasy. But when he discovers she is a virgin, he uncovers something in himself—a conscience. Now his plan takes a shocking turn—one this dark-hearted prince had never anticipated!

« REVIEW: One Night She Would Never Forget by Amy Andrews
REVIEW: Complete Me by J. Kenner »