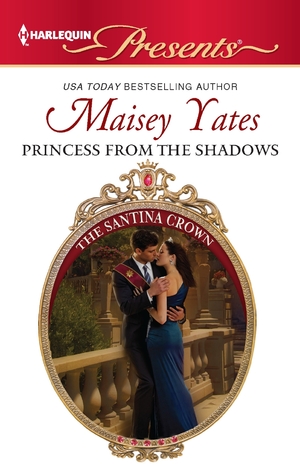 Princess From the Shadows by Maisey Yates

Santina’s royal palace officials were tight-lipped about claims that Prince Rodriguez Anguiano was jilted by his fiancée. But it seems the prince did not leave Santina empty-handed after all!

Princess Carlotta Santina has been living out of the spotlight and under a cloud since giving birth to her illegitimate son. Now she’s arriving at Rodriguez’s Spanish palace in preparation for their forthcoming nuptials.…

Perhaps the prince should get some new advisers, because he’s about to discover that his blushing bride comes with an unexpected bonus!

Princess From The Shadows will have you captivated from the very start; A passionate tale about new beginnings and second chances.

What sets this book apart for me are the life like characters in Prince Rodriguez and Princess Carlotta.

I think Maisey did an amazing job bringing her characters to life…. As a reader you are emotionally vested in Rodriguez and Carlotta, ….. you share their ups and downs and cheer them on towards their HEA.

I’m glad that Maisey choose to focus on the characters and their journey to redemption and forgiveness and ultimately love and belonging rather than an intricate storyline or other over used tropes.

Princess from the Shadows is another winner from Maisey Yates and a great continuity to the Santina Crown Series.

« Review: His Larkville Cinderella by Melissa McClone
Review: The Man Behind the Scars by Caitlin Crews »
Comments are closed.