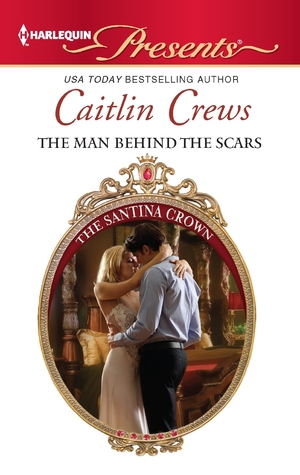 The Man Behind the Scars by Caitlin Crews

Rafe McFarland, eighth Earl of Pembroke—and twenty-first-century heartthrob—has secretly wed former model and tabloid darling Angel Tilson! Angel has long been believed to be in financial difficulty, prompting feverish speculation that her marriage to the tortured billionaire is one of the strictest convenience.…

Bearing terrible scars from his time in the military, Rafe rarely leaves his remote Scottish estate. And with the terms of this deal negotiated, possibly behind tightly closed bedroom doors, is Rafe demanding repayment—in kind—from his new wife…?

The Man Behind the Scars blew me away! It was so much better than I expected it to be…. outstanding really.

Angel and Rafe are two exceptionally well-written characters, they never quite say or do things you expect them too. Add to that sizzling chemistry, great dialogues and a plot that constantly evolves and what you have is a compelling great read.

Angel is quite the materialistic gold digger; were it not for her character this book would have been an OK angsty Presents, but her snark and wisecracks make this a really enjoyable read.

The Man Behind the Scars is by far the best Harlequin rendition of Beauty and the Beast I have read to date. A book I would highly recommend.

Quotes from the book

It was one thing to boldly decide that you were going to capture a rich husband to save you from your life, and more to the point from the desperate financial situation you’d discovered you were in through no fault of your own, Angel Tilson thought a bit wildly as she stared around the glittering ballroom, but quite another thing to do it.

He didn’t even have to be royal, she thought generously, eyeing the assorted male plumage before her from her position near one of the grand pillars that lined the great room—all Angel needed was a nice, big, healthy bank account.

« Review: Princess From the Shadows by Maisey Yates
Review: Playing at Love by Ophelia London »

One Response to “Review: The Man Behind the Scars by Caitlin Crews”