Ramón and Julieta was the first book in the new Love and Tacos series by Alana Albertson, who was a new author for me. 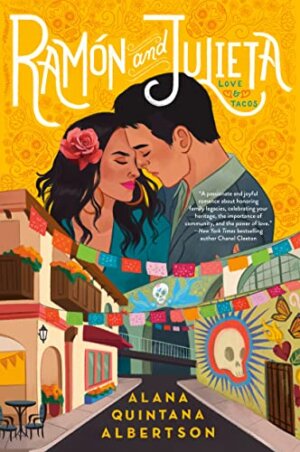 The storyline was parallel to Shakespeare’s Romeo & Juliet with the enemy to love troupe, but it ended with a happy ever after instead of death. It was a heartbreaking story and a lovely tribute to Mexican-American culture, community, and the struggles with gentrification.

Chef Julieta Campos was struggling to keep open Las Pescas, her family’s sea-to-table taqueria. Several years back her family’s fish taco recipe had been stolen by the man who started the Taco King chains. Their restaurant served authentic Mexican cuisine and recipes Julieta came up with. The restaurant was on the block of buildings that were being sold so Las Pescas future was uncertain. She decided to stop stressing over the future of the restaurant and to enjoy the Day of the Dead celebration along with the company of the handsome stranger who serenaded her. But the night does not proceed like she thought it would when she realized the handsome man was the son of Arturo Montez, the man who had stolen their family fish taco recipe. Then the next day she is devastated to learn the property was sold to the Montez family and they planned on shutting down all the independent shops on the block.

Ramon Montez’s father, Arturo, had started Taco King and now they had restaurants throughout the United States. As CEO of the company Ramon handled the purchases of properties where they would open new Taco Kings. There was one block of property for sale in Barrio Logan that was in the center of the community and opening one of their chain restaurants there was his father’s long-time dream. Unfortunately, the Montez family were known as gentrifiers and were not wanted in Barro because the community felt they had sacrificed their Mexican culture to accommodate the non-Hispanics. Ramon looked at the property as a prize to win and had not given any thought to the actual community or small independent shops until it was too late. Although he knew they would get resistance from the community, he hadn’t taken the time to understand the importance of the community’s culture. He struggled between the community’s desires and his father’s plans.

Ramón and Julieta by Alana Albertson was a heartbreaking story of the struggles between small communities and gentrification. I loved learning about Dia de los Muertos, Day of the Dead, and its relevance. The connection between Julieta and Ramon was instantaneous and watching them grow in their relationship was great. I enjoyed the book and would recommend it if you like the enemy to lover trope.

When fate and tacos bring Ramón and Julieta together on the Day of the Dead, the star-crossed pair must make a choice: accept the bitter food rivalry that drives them apart or surrender to a love that consumes them.

Ramón Montez always achieves his goals. Whether that means collecting Ivy League degrees or growing his father’s fast-food empire, nothing sets Ramón off course. So when the sexy señorita who kissed him on the Day of the Dead runs off into the night with his heart, he determines to do whatever it takes to find her again.

Celebrity chef Julieta Campos has sacrificed everything to save her sea-to-table taqueria from closing. To her horror, she discovers that her new landlord is none other than the magnetic mariachi she hooked up with on Dia de los Muertos. Even worse, it was his father who stole her mother’s taco recipe decades ago. Julieta has no choice but to work with Ramón, the man who destroyed her life’s work–and the one man who tempts and inspires her.

As San Diego’s outraged community protests against the Taco King take-over and the divide between their families grows, Ramón and Julieta struggle to balance the rising tensions. But Ramón knows that true love is priceless and despite all of his successes, this is the one battle he refuses to lose.

One Response to “REVIEW: Ramón and Julieta by Alana Albertson”