Royally Not Ready by Meghan Quinn: One moment Lilly Campbell is living her best life in Miami 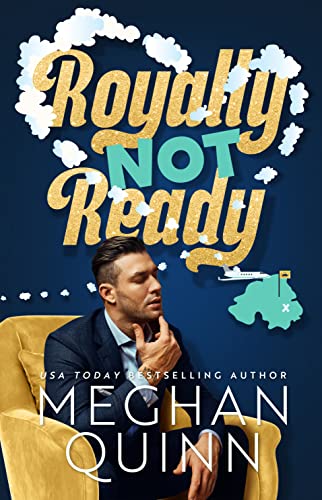 hosting her wet t-shirt contest on the bikini wagon the next she is being whisked away to this picturesque Scandinavian island of Torskethorpe by hunky grouch Keller Fitzwilliam who claims that she is their long lost princess and that she is their countries last hope. Desperate to learn more about her mother Lilly decides to go along with this crazy little princess bootcamp in the hopes that she can finally find that missing part of her heart. The last thing Lilly expected was to fall in love with Torskethorpe or her grouchy teacher Keller. But can Miami bikini clad wild child Lilly really assume the role of picture perfect princess all while convincing ever loyal Keller that their difference in status doesn’t mean anything to her?

Holy crackers when Quinn said this would be her hottest book to date she was not kidding! Royally Not Ready was the grown up version of The Princess Diaries mashed up with 50 Shades Of Grey, and let me just tell you it was HOT!! I think I can safely say that this was my favourite book by Quinn to date, there was just something so incredibly addictive about this book while at the same time having a sensitive note intertwined in Lilly and Keller’s steamy story.

“There is no way to explain, This burning, merciless feeling, Biting through my bones. It eclipses my thoughts, It burrows into my veins, A cataclysmic force so strong, I can’t breathe. I need you.”

I have to start of by saying that I just loved Lilly! Gosh this girl was such a vibe. I loved that she was so loud, proud and completely herself. Even with all this change going on around she was son confident in her own skin and went after what she wanted. One of the things that I really liked about Lilly was that she constantly communicated about how she was feeling, we got to experience this entire journey with her and she never held back on sharing how she felt. This only made me like her all the more, her openness and ability to express her fears and insecurities only made it easier to root her on.

Keller Fitzwilliams was just a dream! I loved all his grouchy, viking, alpha vibes and boy oh boy does he deliver and then some! The more we got to know Keller the harder to became not to love his guy. He both melted my heart and broke it at the same time, for all his buttoned up professionalism he has been nursing a broken heart and desire for belonging. The more we got to know his story the more I found myself loving his guy, not only was he completely dedicated and loyal to the crown but his connection to King Theo was just the sweetest. As much as this was a story of Lilly finding her feet in new water this was as much of a change for Keller.

“Never in my life, have I ever had someone treat me the way you do. You’re the knight I never knew I needed. You offer me safety and solace. Just being in your arms makes me feel more comfortable than anywhere else on this planet.”

The chemistry between Lilly and Keller was scorching HOT!! I think these two had the best chemistry that I have read in a good long time. It was pretty hard not root these two on as they went back and forth with that undeniable pull between them. I have to say that I absolutely loved the determination in which Lilly pursued Keller, I really liked that she went after what she wanted and gave Keller that much needed push. One of the things that made this book really work for me was the fact that the connection between Lilly and Keller was so much more than just physical, I liked that they had a similar back story and that the loss of their parents helped bring them together and bond them. I have to say the entire hate to love thing really worked for them and the whole being trapped in Harrogate only made things all the more steamy!

“You might be a future queen, but when it comes to the bedroom, I’m your goddamn king. Got it?”

I just loved getting to learn about Torskethorpe and all their rich traditions with Lilly, Quinn has done a brilliant job drawing us into the history and customs of this cute sub Atlantic island. I really liked Lara and that Quinn kept with the strong female characters, I really liked the bond that she formed with Lilly and that she was more than just her bodyguard but also her friend. Also I absolutely loved the Bridgerton references and that Keller made up the Informer to entertain Lilly, this was such a nice touch that really worked out well in the end with Keller winning back Lilly. There was one OMG what is going to happen moment that really tested Lilly and Keller’s relationship – it was just the perfect mix of angst that this book needed! This book had me tearing up at a few places but this only made me love reading it all the more. I absolutely loved King Theo and Queen Katla, I do wish that we got to see a bit more of them with Lilly but what we did get was just gooey goodness.

Royally Not Ready was the BEST book that I have read by Quinn, this sweet steamy read will worm its way into your heart within the first few chapters! This is a total MUST read!

So there I was selling bikinis out of my truck in South Beach Miami, getting ready to kick off a wet t-shirt contest when the world’s biggest grouch approached me – Keller Fitzwilliam.

The man had the sultriest British accent I’ve ever heard. And he looked like he just walked off a Viking boat and into a suit tailored specifically for his impressively muscular frame. Only problem is, he had the warmth of an ice pick and he kept telling me he was here to take me back to his home country.

Of course, I didn’t follow him. I might be up for a good time, but I’m also educated enough to know leaving with a stranger isn’t smart. Well, that’s until he mentioned my mom’s name. My mom who passed away several years ago.

So after some serious fact-checking, my bikini-clad bum went with him to a sub-arctic country I had never heard of just north of the British Isles, where I found out my grandpa was the king of said freezing country, and I was the one and only heir.

Desperate to learn more about my mom, I decided to give this princess thing a chance.

Because Mr. Ice Pick was put to the task of training me and he’s not just cold as ice, he’s pompous, aggravating, and possessive. And did I mention we have to share a bathroom in a tiny castle?

We are oil and water every single day and even though he’s training me to be queen, I have this simmering desire to kneel before him.

« REVIEW: The Night the King Claimed Her by Natalie Anderson
Spotlight & Giveaway: Tastes So Sweet by Kelly Cain »

One Response to “REVIEW: Royally Not Ready by Meghan Quinn”