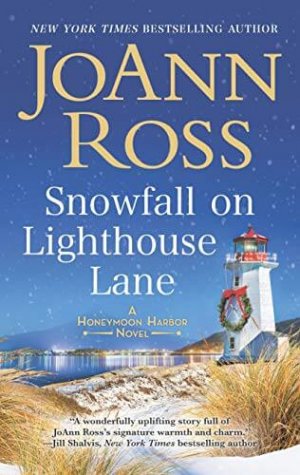 herself back in Honeymoon Harbor, dealing with the me too movement as well as her mother’s cancer scare. The last person she wants to deal with is her first love who left her behind, Aiden Mannion.

After acting out as a teenager, Aiden was given a choice–jail or joining the military. After his stint in the Marines ended, he wound up on a police detail, which wounded up in an ambush with his partner dead. He returned to Honeymoon Harbor to heal, but when the police chief had a heart attack and was forced to retire, Aiden’s father, the mayor of Honeymoon Harbor, gives the job to a very reluctant Aiden. On one of his first days on the job, the last person he expected to pull over was Jolene. Now Aiden sees this as his chance to prove that he never stopped loving her, all while dealing with his partner’s ghost and learning that that ambush may have been a set up.

I enjoyed the relationship between Aiden and Jolene. It wasn’t rushed, and they took the time to get to know one another again after spending so many years apart. Jolene isn’t quick to forgive Aiden for they way he ended things, and he’s determined to prove that he’s going to stick around for the long haul.

I enjoyed Aiden’s interactions with Bodhi’s ghost. It was clear the pair were good friends when they were both alive and their friendship transcended death.

Bodhi swiped a hand through his shaggy surfer hair. “I’m still new at this stuff. Which may be why I’m here.” He turned thoughtful, the way he’d do when they were working out a case. “At first I thought I was here for you. To help you adjust and keep from doing something stupid like eating your gun. But hell, Aiden. What if it’s just me? What if I’m not ready to quit you?”
“Like I’m supposed to have an answer for that?”
“Nah. I was mostly wondering out loud. You’d think, if a guy was going to continue to live in some parallel universe, he’d be set up with some kind of mentor,” he mused. “Like when you’re a rookie cop and you’re partnered with a more experienced officer who teaches you the ropes. Or at least you should be given a handbook after you die. Dead for Dummies.”

I did have some issues with the story, however. It felt like there was too much going on at times. There’s Jolene and her mother dealing with a potential cancer diagnosis, and Jolene is also dealing with the consequences of speaking out as part of the me too movement. Aiden is dealing with Bodhi’s ghost, a domestic violence case that happens between a couple multiple times, as well as trying to figure out what really happened on the case that wound up with him being shot and Bodhi being killed. Because there was so much going on, it didn’t feel like the subjects were covered as in depth as they could have been. They felt a bit rushed in order to squeeze everything in.

There were also some minor inconsistencies in the book. For example, in one sentence Jolene is mentions that Aiden brought her an eclair, then the next sentence after her friend Shelby asks about the eclair, she says he showed up with chocolate croissants instead. Having read an advanced copy, I hope these are corrected before publication.

Snowfall on Lighthouse Lane would be for readers who enjoy second chance romances mixed in with a small amount of suspense and mystery. My issues with the story aside, I found it to be a good read and I’m looking forward to seeing what else is in store for Honeymoon Harbor.

Growing up on the wrong side of the tracks, Jolene Harper is forever indebted to the mother who encouraged her to fly—all the way to sunny LA and a world away from Honeymoon Harbor. Although Jolene vowed never to look back, returning home isn’t even a question when her mom faces a cancer scare. Which means running into Aiden Mannion all over town, the first boy she ever loved—and lost—and whom she can barely look in the eye.

Aiden’s black-sheep reputation may have diminished when he joined the marines, but everything he’s endured since has left him haunted. Back in Honeymoon Harbor to heal, he’s talked into the interim role of police chief, and the irony isn’t lost on the locals, least of all Aiden. But seeing Jolene after all these years is the unexpected breath of fresh air he’s been missing. He’s never forgotten her through all his tours, but he’s not sure anymore that he’s the man she deserves.

Despite the secret they left between them all those years ago, snow is starting to fall on their picturesque little town, making anything seem possible…maybe even a second chance at first love.

3 Responses to “REVIEW: Snowfall on Lighthouse Lane by JoAnn Ross”