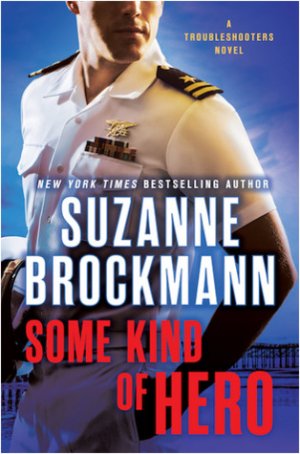 Maddie moved in with him after her mother, his ex, died, he thought they’d finally have a chance to get to know each other. Little did he know that the surly teenager would make him use every trick he knows in training Navy SEAL candidates to get her to open up. But when Maddie goes missing, Pete is left scrambling to find her. His gut is telling him she’s in trouble somehow. So he’s relieved when his best friend Izzy and a bunch of the Troubleshooters step up to help in the search. But it’s his neighbor Shayla Whitman who knocks him for a loop when she jumps in to the fray and is with him every step of the way. Pete realizes at this most inopportune time that he’d like to see where a relationship between him and Shayla could go. Although first they need to bring Maddie home safely, then he can think of their promising future.

“I always thought I was broken. I believed Lisa when she said it was all my fault and…having you help me write the story, you know, of what happened with her… It makes me see it differently, and that’s why I think, you know, that I actually might deserve someone as great as you in my life.”

Being a mom to two teenage boys and having a successful career writing romantic suspense and thrillers has given Shayla the ability to think quickly and get any job done efficiently. However her writing career these days has hit a bit of a roadblock. So when her neighbor, the hot Navy SEAL across the street, needs her help to track down his daughter, she’s all on board. And it’s not just about getting to spend time with Peter. Well, not *only* that, although Shayla does have to admit that he’s easy on the eyes and a great conversationalist. But she knows how tough being a single parent can be. And with his child in danger, she’s sure Pete is at his wit’s end. So she helps him follow the clues to Maddie’s whereabouts and determine the best course of action. If only she could sort through her swirling emotions so decisively when it comes to the hunky, sexy, caring SEAL who charged into her life.

“Okay, so when they’re in the utility closet, Loretta’s here.” He let go of her hand and took another few steps backward, putting a few feet of space between them. “And Jack’s here. And they’re talking, yada yada…”
Shayla laughed. “You’re not seriously going to try to mythbust a scene from a romance novel…?”
“I am, yes, so shh…”

Hot Navy SEALs. Need I say more? No, but seriously, Suzanne Brockmann has a knack for pairing up just the right personalities to create unforgettable stories. And that goes for the love matches she creates as well, as was definitely the case with Lieutenant Peter Greene and romance writer Shayla Whitman.

‘This connection, these feelings, this moment they were sharing–it was real. It was truth.
It was there, solid, beneath whatever name they gave it.’

I’m still rather newish to the Troubleshooters series considering this is the 17th book and I’ve only read a few. But thankfully these can work as standalones. I do love Suzanne Brockmann’s characters and her fun writing voice, with her use of modern slang and military speak. Plus the fact that she’s not afraid to write about interracial relationships, gay/lesbian relationships, or be realistic about drug use, violence, cheating, etc. The SEALs (and their friends & family) are an offbeat bunch, which is just how I like it. Peter, aka Grunge, was quite different than I thought he’d be. It turned out that under the commanding instructor persona he was a bit of a romantic, kind of a surfer dude, and a genuinely nice, caring guy. Not that his BUD/S trainees would agree, I’m sure…

But I was drawn to Pete right away, with his concern for his daughter Maddie’s welfare and his willingness to do as Shayla said, being that she was a smart woman and an awesome mom. His backstory with Lisa, Maddie’s mom, really explained a lot about his personality. I love how Brockmann wove that in, with Peter telling the story via emails to Maddie and how it finally started to create a bond between them, allowing her to see who her dad truly was. *sigh*

Shayla, now, she was a dynamo. Highly intelligent, great mom, talented writer. But not so sure of herself in the romance department thanks to her cheating ex. I loved her relationship with her kids, who were great secondary characters and made me laugh–especially Frank when he officially met Pete. The only thing that got a little stale was how one of Shayla’s characters Harry “talked” to her in her mind and she was constantly shushing him. It was funny, don’t get me wrong, but I don’t know that it was ever really addressed with Pete as to why she said “Shhhh” out loud all the time. I did enjoy how creative and quick-thinking Shayla was. She kinda saved the day a few times in how she helped Pete communicate with Maddie and with assisting in her search.

What an adventure! I think readers will have an enjoyable time with Some Kind of Hero and will want to learn more about the previous books (and the boundaries they push) if they’ve not already read them. The quirky cast, the emotional drama, the ultimate resolution. It worked well for me and hopefully it will for others.

Navy men don’t come tougher than Lieutenant Peter Greene. Every day he whips hotshot SEAL wannabes into elite fighters. So why can’t he handle one fifteen-year-old girl? His ex’s death left him a single dad overnight, and very unprepared. Though he can’t relate to an angsty teen, he can at least keep Maddie safe—until the day she disappears. Though Pete’s lacking in fatherly intuition, his instinct for detecting danger is razor sharp. Maddie’s in trouble. Now he needs the Troubleshooters team at his back, along with an unconventional ally.

Romance writer Shayla Whitman never expected to be drawn into a real-world thriller—or to meet a hero who makes her pulse pound. Action on the page is one thing. Actually living it is another story. Shay’s not as bold as her heroines, but she’s a mother. She sees the panic in her new neighbor’s usually fearless blue eyes—and knows there’s no greater terror for a parent than having a child at risk. It’s an ordeal Shay won’t let Pete face alone. She’s no highly trained operative, but she’s smart, resourceful, and knows what makes teenagers tick.

Still, working alongside Pete has its own perils—like letting the heat between them rise out of control. Intimate emotions could mean dangerous, even deadly, consequences for their mission. No matter what, they must be on top of their game, and playing for keeps . . . or else Pete’s daughter may be gone for good.

« REVIEW: The Dangerous Billionaire by Jackie Ashenden
Spotlight & Giveaway: I Need You Tonight by Stina Lindenblatt »

12 Responses to “REVIEW: Some Kind of Hero by Suzanne Brockmann”