In Stranded with the Tycoon by Sophie Pembroke,Luce finds herself stranded in a cottage with Ben Hampton due heavy snowfall and blocked roads.Tall,dark and arrogant Ben had last seen Luce when he was dating her roommate back in his University days. 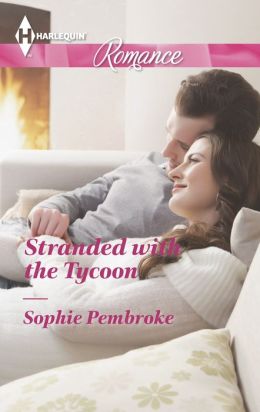 Now when they come face to face after so many years,he is determined to unleash the fire hidden behind Luce’s buttoned up exterior and being getting snowbound in the countryside gives him the perfect opportunity to tempt out the real Lucinda Myles!

‘So, feeling any more relaxed?’ he asked.
‘Lots,’ Luce answered honestly. ‘But that might just be the alcohol.’
‘True.’
They walked a few more steps, and Luce almost thought he might drop the subject.
Then he asked, ‘So, what do you think might relax you a little more?’
Truly great sex, Luce thought, but didn’t say.
The sort that made you forget your own name, just for a little while. The sort that let you sleep so deeply you woke refreshed and energised, however much of the night you’d spent exploring each other’s bodies.

Stranded with the Tycoon is a beautifully written romance novel with a slow build up.The romance was based more on the conversations between the characters and how they thought about each other rather than their mutual attraction and passion.

The characters were a nice package altogether-Luce was an independent and confident heroine who was forever putting everyone’s else needs before her own while Ben was perfect in every sense except in the commitment department.Everything was good except the pace of the story,which was a little slow for me.

Overall it was a good read with smooth transitions and slow paced romance.I would recommend it to anyone who prefers a slow romance with more emotions than passion.To conclude I would leave you a small excerpt:

The man who sees her beauty…

Ben Hampton is the last man in England that workaholic historian Luce would ever choose to be stranded with. Tall, dark and infuriatingly arrogant, he’s also a reminder of her not-so-glorious romantic history—something she’s spent the past few years burying herself in work to forget.

Hotel tycoon Ben knows there’s fire behind Luce’s buttoned-up exterior, and fanning its flames is an irresistible temptation. Luckily, getting snowbound in the countryside gives him the perfect opportunity to tempt out the real Lucinda Myles!

2 Responses to “REVIEW: Stranded with the Tycoon by Sophie Pembroke”