In The Astronaut and the Star by Jen Comfort, While a lot of kids say they want to grow up to be an astronaut, Regina 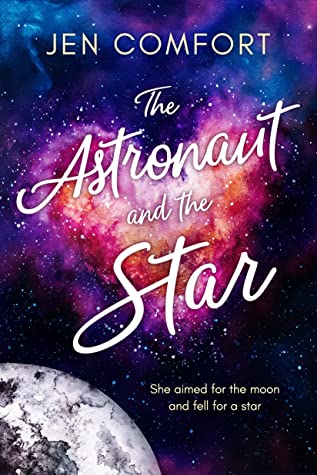 “Reggie” Hayes has actually made that a reality through hard work and tenacity. After an aviation career in the Navy and a mission aboard the International Space Station, she has her sights set on being the first woman on the moon. Unfortunately there was an “incident” with a reporter. And now Reggie has to get back in the good graces of the board at NASA. Coaching rising Hollywood star Jon Leo through astronaut training could be just the thing. Although she didn’t realize how tough it would be to not only change her snarky, autonomous ways but to also ignore their instant chemistry. Especially as Jon proves to be one of the kindest, most charismatic guys Reggie has ever known.

“I’m not good at people stuff, and you are. I want you to help me look good on camera so my boss and the board think I’m, you know…” Reggie gestured to him to fill in the rest, but he only cocked his head at her.
“Uh…”
“You know. Like *you*.”
“Handsome? Well endowed? Remarkably modest?”
…”Friendly,” she bit out.

Actor Jon Leo has been paying his dues in Hollywood for years and finally has the big break he’s been waiting for. Even better? The lead role has him cast as an astronaut. And for a science and nature geek like him, that’s a win-win. The biggest challenge Jon faces during his training isn’t staying focused, which is his usual nemesis. It’s his trainer Reggie. She’s as grumpy and sarcastic as she is beautiful and intelligent. And that’s a powerful aphrodisiac for Jon. He knows he needs to take things seriously so he can deliver an Oscar-worthy performance once filming begins but he is completely distracted by Reggie and the steamy, wonderful future he envisions for them. Which leaves Jon to wonder if he can talk Reggie around to his way of thinking…

‘How could one woman be so ferocious yet so huggable?’

The Astronaut and the Star was a feel-good romantic comedy that had plenty of heart, entertaining banter, science-y goodness, and an opposites attract couple who will quickly win your heart.

‘She might be the only woman on Earth who thought it more feasible to walk on the surface of the moon than to embark upon a romantic relationship.’

Talk about a role reversal type of story. One that I enjoyed immensely and think author Jen Comfort pulled off quite well. We had a grumpy *heroine* who was an accomplished astronaut, while the hero was a sunshiny actor who led with charm and self-deprecating humor. (Right?!) What a fun, sexy, perfect pairing Reggie and Jon made. And not only were their personalities polar opposites, but their career issues were quite different as well, which made for some interesting conversations–and memorable bargaining–as they began helping each other.

That was kind of the crux of Jon and Reggie’s situation: they needed each other to accomplish their goals but their attraction kept getting in the way. Jon wanted to prove himself as a serious actor and Reggie needed to “lighten up” and become more of a team player–as well as improve her, ahem, lack of social skills. (lol) You can only imagine the teasing, flirting, and charm Jon had to use to get Reggie to actually smile and give him the time of day. It was adorable how he was wowed by her smarts and her feisty attitude (which I loved as well!). Same could be said about how Reggie was knocked flat by Jon’s kindness and perpetual good nature. It was a match made in heaven–or the stars, if you will. And I hope readers get as much delight out of Jon and Reggie’s story as I did.

QOTD: Have you read any romances where the heroine was the grump and the hero was the upbeat one?

An out-of-this-world romantic comedy featuring an astronaut tasked with training a Hollywood actor for a space flick.

Astronaut Regina “Reggie” Hayes wants to be the first woman on the moon—it’s all she’s ever dreamed of. But after a PR disaster, Reggie is off the list for a lunar mission. To rehabilitate her reputation with NASA, she agrees to a different kind of assignment: astronaut “training” with a Hollywood action hero.

Jon Leo is a charmer. With credits that include an underperforming sitcom and a campy action flick called Space Dude, his upcoming role in a prestigious movie could prove he’s a star. But Jon isn’t just big muscles and an otherworldly smile—he’s also a total space nerd. He’s pumped about his own personal space camp…until he meets ice-cold Reggie.

Although Reggie and Jon are polar opposites, their mutual attraction is undeniable, and it only takes a few weeks in close quarters for them to give in to its magnetic force. Jon is set on convincing Reggie this is a match made in the heavens, but her future is in space, and his is among stars of the Hollywood kind. The odds of successfully launching a real relationship outside the confines of the training base are anything but optimal.

Reggie, content with keeping things casual, is forced by a sudden turn of events to confront the possibility of losing Jon forever. Now, she’ll do whatever it takes to win both the man and the moon.

2 Responses to “REVIEW: The Astronaut and the Star by Jen Comfort”