The Christmas Dress: A Novel by Courtney Cole is a very heartwarming, touching story about the magic 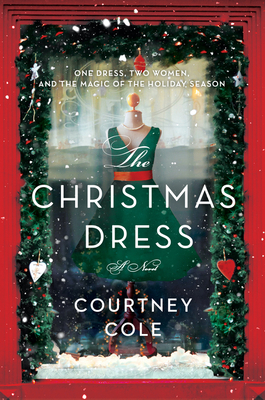 of true love, family and friendship.

Meg Julliard has returned to her hometown of Chicago and the Parkview West, the apartment building where she was raised. She has inherited the building after the death of her father, the only family she had left after the earlier deaths of her mother and her sister. This move is hard for Meg as she has to leave behind the job she had in New York City working for Stitch, a prominent fashion magazine. The job had been a big step up toward her career goal of owning a fashion design business. Meg also left behind her ex-boyfriend Drake who had no confidence in her. The Parkview is old and in much need of repair and there are no funds for what needs to be done. It also is basically populated by senior citizens. Meg comes to love and become good friends with the seniors and the handyman for the building. Yes, Logan Scott is hot, sweet and caring. Nothing like Drake.

Ellie Wade has lived in the Parkview for ten years. Her daughter, whose career moved her to London, is pushing for Ellie to move to assisted living. Ellie says she is fine where she is but while going through her things as she contemplates moving she comes across “the dress,” one that was very special to Ellie many years ago. As Ellie tells it this dress represents the best and the worst day of her life. She calls it a magic dress and passes it on to Meg.

Logan Scott is the handyman for the Parkview. He is very talented and can fix anything. Since he prefers being his own boss being a handyman is what he chooses to do even though he has his contractor’s license. He was friends with Meg’s father and enjoys the friendship of the seniors in the Parkview. When Meg arrives to take over management of the building Logan is struck by her beauty and lovely personality. Even though Logan just got out of a bad relationship he falls for Meg. Will she stay or sell the Parkview?

In the story the Christmas dress plays an important role in the lives of a number of the characters. I liked how Logan and the residents believed in Meg’s dream and supported her all the way. The special dress plays a starring role in Meg’s and Ellie’s lives. I loved how this anchored the storyline. I feel this is a great story to light up the reader’s Christmas spirit.

An enchanted Christmas dress brings two generations of women together for the magic of the season in this delightful holiday story from New York Times bestselling author Courtney Cole.

One Dress. Two Women. The Magic of the Holiday Season.

When hopeful fashionista Meg Julliard must return to her hometown of Chicago to manage her late father’s apartment building, she thinks her dreams of making it in the fashion business are over. Add in her father’s eclectic roster of tenants who all need Meg’s attention (ASAP!), a host of building related disasters, and a handsome handyman she keeps embarrassing herself in front of, and this has all the makings for the worst Christmas she’s ever had.

Ellie Wade, one of the building’s longtime residents, is also not feeling the Christmas Joy this year. She is preparing to move into a nursing home (reluctantly), and is in the process of sorting through her belongings to downsize. Every corner of her apartment holds memories, some good, some bad. But there’s one dress she hesitates to pack up as it represents both the best and worst night of her life.

Ellie and Meg strike up an unlikely friendship and the story of Ellie’s dress comes out. Ellie gifts the gorgeous dress to Meg, hoping that it will bring her more luck, on the condition that she wear it to the building’s Christmas party.

The dress magically fits, and while it eventually leads to the best night of Meg’s life, it also acts as inspiration for Meg to follow a life-long dream of her own, a dream that will help save the crumbling Parkview West, and restore it to its former glory, and keep it as a safe home for all of the current tenants.

The dress and the magic of the holiday season helps both Meg and Ellie find their own happy endings.

One Response to “REVIEW: The Christmas Dress by Courtney Cole”