The Cul-de-Sac War by Melissa Ferguson: Playfulness and whimsy are the key ingredients in this 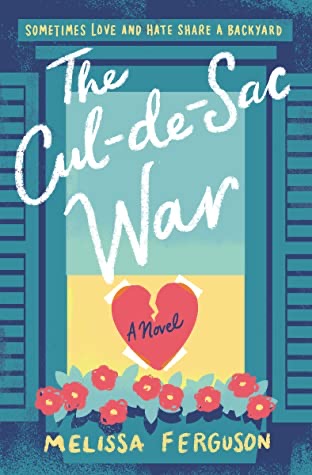 lighthearted read that will successfully distract you momentarily from the more darker and serious aspects of life.

Fleeing the stage amidst the worst possible costume malfunction, and knowing she only has 5 short minutes before her one key line, Bree dashes through the back of the theatre in search of a quick solution, flying headlong into Chip, who has been banished by security. To her utter relief, Chip literally saves the day and possibly her budding acting career, by remedying her fairy costume with some handy green duct tape enabling her to bolt back on stage to finish the scene. As the curtain closes, our two flirtatious heroes make lingering eye contact and what initially seems like a perfectly romantic and impromptu meeting, turns out to be anything but.

As one funny happenstance leads to another, it appears, Bree has inherited a new next door neighbour, who also just happens to drive like a maniac, own a giant slobbering killer dog and who busts her water main within moments of moving in. And so our mischievous duo manage to douse the attraction flames in moments, paving the way for some spirited one-upmanship that becomes more and more outrageous as the weeks go on.

Throughout, both characters grow increasingly creative and agile in their hilarious plotting of neighbour sabotage. Chip, despite his attempts at trying to fix the chaos he causes, develops an almost unhealthy obsession with trying to push Bree’s buttons, blind to the underlying reasons she is so bent out of shape. Like all good protagonists, he is cheeky, gorgeous and definitely quick of wit. Likewise, having met her match in Chip, Bree is bold, beautiful and opportunistic, and in absolute denial that she is aware of his every move, both in the house, his yard and beyond.

Whilst some serious topics were covered with some grace and style, and in turn gave some depth to our playful pair, this is definitely not a ‘human condition’ novel, or one that tackles hard topics with much beyond a shiver. However, in many ways, this suited the narrative intent perfectly, paving the way for a thoroughly enjoyable RomCom that will have you murmuring nervously and trying to predict what comic situation will unravel next.

Ultimately, this squeaky clean, easy to read romance will delight with devilish pranks and frisky disasters, leaving you with a strange desire to take a cup a sugar to your neighbour and check the fence line between your houses is firmly in place.

Bree Leake doesn’t want to be tied down. She’s had more jobs than she can count, and she plans to move as soon as the curtains fall on her less-than-minor stage role at The Barter—the oldest live performance theater in the US. But just when it’s time to move on again, Bree’s parents make her an offer: hold steady for a full year, and they will give her the one thing she’s always wanted—her grandmother’s house. Her dreams are coming true . . . until life at the theater throws her some curve balls.

And then there’s Chip McBride—her handsome and infuriating next-door neighbor.

Chip just might be the only person whose stubborn streak can match Bree’s. She would move heaven and earth to have him off her cul-de-sac and out of her life, but according to the bargain she’s struck, she can’t move out of her house and away from the man who’s making her life miserable. So begins Bree’s obsessive new mission: to drive Chip out of the neighborhood—and fast.

Bree isn’t the only one who’s a tad competitive, and Chip is more than willing to fight fire with fire. But as their pranks escalate, the line between love and hate starts to blur—and their heated rivalry threatens to take a hilarious, heartwarming, and romantic new turn.

2 Responses to “REVIEW: The Cul-de-Sac War by Melissa Ferguson”