The Dating Itinerary by Brooke Williams: Write a series of articles on dating in the modern world should be 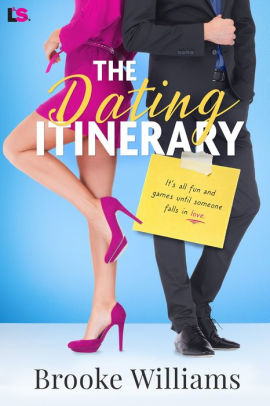 a cake walk, plus getting the opportunity to be featured on the cover and the added bonus of possibly meeting her soul mate, made this entire thing a no brainer for Penny. However the very last thing Penny expected was to see her old rival George, at the first item on her dating itinerary. Now how does one tactfully avoid said rival without causing a scene, while seated at a corner table at speed dating? Oh and George is the next guy headed to her table, the answer is you really cant. After having an awkward reintroduction Penny and George soon find themselves meeting again only this time Penny expecting it to be someone entirely different.

“The matchmaker told him something had to give, but with Sasha, he didn’t see any compromises being made. The only thing she was lacking was the fact that she wasn’t Penny.”

Soon the two rivals find themselves back in competition with each other, with both of them taking on the very same dating itinerary. From their awkward speed dating meeting to hitting up tinder and trying out a strange matchmaker, the two go about their dating misadventures all while growing closer. But what happens when they both realise that what they have been looking for in their perfect partner has been right in front of them all this time?

“He claimed her mouth with his and let all of the emotions of the past few weeks out through his kiss. He wasn’t always good at expressing himself with words, but his actions were loud enough to speak for him.”

I loved reading this enemies to lovers romance. The Dating Itinerary had me laughing out load from start to end with all the zany dates that Penny and Geo get set up on. I loved the entire idea of doing a series of articles following the dating adventures of the journalist. The other thing I loved was how relatable the entire narrative was, like who hasn’t experienced some of these things, granted being matched with your distant cousin was definitely not one I can say I have experienced, thankfully! Though I will say I’m definitely going to be keeping an eye out for all bearded men – you will get it once you read the beard date disaster, no spoilers.

Both main characters were brilliant, though I will say Penny stole the show for me, not only did she have a super unique name but so did all of her sisters. That was another thing I loved about this novel; the strong connection to family. Both main characters played a very active role with their siblings and I found that added a lot to the book. Which brings me to our leading man; George or Geo as he wanted to be known, I loved that his entire motive for doing the dating itinerary was so that he could help better his sisters charity support group.

“If you’ve read his final article, you know he saw me as his needle in the haystack. I am proud to announce that he didn’t give up on finding me, and now, I don’t plan to jump back into that haystack ever again.”

Overall this book was a super cute funny quick read that was relatable to all ages. One thing is for sure dating is not easy no matter which route you take, but you are sure to have a few laughs along the way to finding your needle in the dating haystack.

As if it wasn’t bad enough to be deemed the “most single person” at her magazine’s office, budding reporter Penny has now been tapped to write a series of features called “The Dating Game.” From speed dating to Tinder, old-fashioned matchmakers to up-and-coming “dark dating,” Penny now has to go on a lot of dates. Silver lining: meeting new people should be fun, right? But running into her old rival, George, at her first dating event is decidedly not. Not only does the arrogant know-it-all have zero trouble attracting women, wherever Penny goes, somehow he just. Keeps. Showing. Up.

Geo knows he’s right on the cusp of writing success with the chance to have his own syndicated column. All he has to do is follow his agent’s ideas for showcasing different dating avenues, and he’ll pull in enough to help his sister’s non-profit women’s shelter get off the ground. Sure, his itinerary is starting to look strangely similar to his old rival Penny’s, but all’s fair in love and syndication, right?

The more they look for love in all the wrong places, though, the more they start to wonder if it was right in front of their noses all along. Still, the brutal dating scene just might end them, if these two don’t kill each other first.

« REVIEW: The Beat Match by Kelly Siskind
Spotlight & Giveaway: Her Accidental Highlander Husband by Allison B. Hanson »
Comments are closed.