In The Secret Heir of Sunset Ranch by Charlene Sands, homecoming hero and wealthy Nevada rancher, Justin Slade returns home from duty and decides to break the news of his best friend’s death to Brett’s grandma and only living relative Mattie-only to get a shock of his life. The woman who shared his bed eighteen months ago is living with Mattie and that too with a son who looks just like Justin! 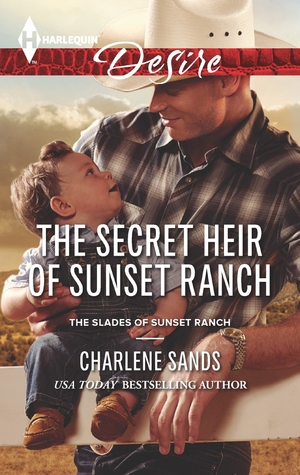 Katherine Grady is shocked to discover that the father of her child lied about his real identity and seduced her claiming to be Brett because of a bet. she’s livid; even if she still finds him as irresistible as ever. Will their secrets keep them apart, or will her hero fight for what’s his?

“If I’m wary and cautious, it’s because I’m not taking any chances when it comes to Connor.”
Kat thought about that a few seconds. “I understand. I’m relieved that you feel protective about him. He deserves…”
“The best in both of us.”

The Secret Heir of Sunset Ranch had an interesting plotline of mistaken identity which has consequences. The story was written in an engaging manner and had me hooked till the end.Secrets form a major part of the story with everyone having them and it helps to keep the reader engaged. The steam factor is quite high with the characters giving in the attraction they feel towards each other.

The only problem I had was with the characters who I could not connect with till the end. Justin attitude towards Kat was wrong in so many situations and the only thing I liked about him was the way he genuinely cared for his son Connor. Kat grew up in a abusive environment and therefore money was a big motivation in whatever she did. I can’t blame her honestly for wanting the best for her son and lets face it-money is important. The faults Kat had only made her more human but I still did not understand her because she kept on leaving Justin off the hook very easily.

“Would you consider it torture to have me touch you?”
He gave it one second of thought and the hot glint in his eyes told her he was ready for anything she might send his way. He pulled her close and kissed her again, whispering, “Hell yeah, if I couldn’t touch you.”

Overall The Secret Heir of Sunset Ranch by Charlene Sands is an engaging read with a different storyline. The characters were often difficult to connect to sometimes and there isn’t much conflict but whatever faults it had was compensated by a different story line, written in an engaging manner.

Recommended for Charlene Sands and anyone who likes non feisty heroines.

A war hero returns to a secret baby surprise in this Slades of Sunset Ranch novel by USA TODAY bestselling author Charlene Sands.

Back from his tour of duty, wealthy Nevada rancher Justin Slade gets the shock of his life. The woman who shared his bed eighteen months ago is in his hometown with a son in tow who looks just like Justin!

Katherine Grady is hiding a dark past, but when she realizes Justin seduced her under false pretenses, she’s livid;even if she still finds him as irresistible as ever. Will their secrets keep them apart, or will her hero fight for what’s his?

2 Responses to “REVIEW: The Secret Heir of Sunset Ranch by Charlene Sands”