In The Sinner by J.R. Ward, As part of the Black Dagger Brotherhood, Syn is a vampire who lives on the 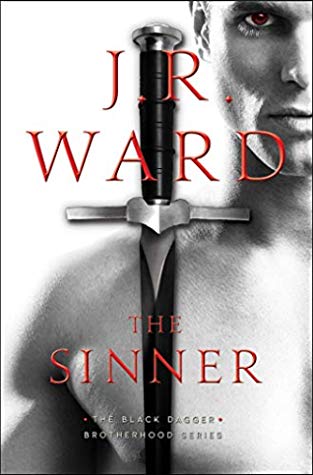 edge, fighting and slaying lessers alongside his Brothers on a nightly basis. But what most of them don’t know is that he also takes on local jobs as a hit man–although he does use discretion in which targets he’ll pursue. It’s when Syn is researching another job that he meets Jo Early. And it sets in motion not only a change in him as he realizes their bond together, but it also puts both of them directly in the path of the evil that is closing in on the Brothers and their family.

Syn’s huge, hulking torso caved into her lap, as if he were past his capacity to hold up the burdens he carried with him.
Running her hand over the rock-hard contours of his bicep, she felt him shudder and saw his thick lashes lower onto his cheek.
“You’re exhausted,” she said.
“More than I can ever explain. Or recover from.”

Jo’s novice investigating skills bring her far more results–scarier results–than she ever dreamed when she started working for the Caldwell Courier Journal. And when Syn enters the picture, she has no idea what to believe. Her head is telling her one thing, her heart a whole other story. What’s clear, though, is that Syn is wrapped up in something dark. And it seems he could use her help in any way Jo’s willing to give it. Even as he’s trying to protect her. But when Syn, Butch and the other Brothers begin to fight the lessers, hoping the prophecy will come true and bring an end to the war, everything changes. And their lives will never again be the same.

‘His faith was strong. His love for Marissa was even stronger. His control over destiny? Big nope on that one.’

Mind. Blown. The Sinner was a high octane novel that answered a *lot* of questions and saw some things finally come full circle. Romance, deceit, power games, and friendship, J.R. Ward pulled out all the stops in this thrilling installment.

‘As much as he hated everything in this moment, as much as he dreaded what he had to do, Jo’s life was more important than absolutely everything.’

Oh my goodness, what an incredible story! I loved that The Sinner read like an old school Black Dagger Brotherhood book, with everything coming down to the friendships and alliances the Brothers have formed over the years. I can’t divulge too much about what happened as it would ruin the epic plot twists and events that took place. I should probably mention two things, though. First, you can actually read The Sinner even if you haven’t kept up with the series where Ward gave just enough background on the characters and previous happenings for it to all make sense. Well, as much as her intricately woven, ever-evolving plotlines can. (lol) And second, this book is around 500+ pages so it is a bit lengthy, although it didn’t feel too wordy to me. There was just a huge amount of ground to cover, so it was well worth the time.

Syn and Jo Early were the main characters, but Butch was a huge part of the story as well. I was happy to get to learn more about Syn, even if his background gutted me emotionally. It was nice to finally understand what made the Mohawk’d dude tick and he was…everything you could want in an antihero. Sigh. To see Syn brought to his knees by his feelings for Jo was such fun. And Jo, by the way, was a terrific heroine. She was strong and independent but still had a touch of vulnerability–and a lot of love to give to those worthy of it. Her journey went in a direction I didn’t see coming, particularly about her heritage. But I think fans will be happy with Jo and Syn’s rough and tumble path. *And* with how Butch and the other Brothers all had their important parts to play.

The Sinner was an amazing game changer that fans will want to savor over and over. Filled with tough choices, lovely romantic connections, badass fight scenes, tender moments that will make you misty-eyed, and funny scenes that will have you roaring with laughter (Jolly Ranchers! And Lassiter, of course!) J.R. Ward continues to impress me with each new story she carefully crafts.

Fate anointed Butch O’Neal as the Dhestroyer, the fulfiller of the prophecy that foresees the end of the Omega. As the war with the Lessening Society comes to a head, Butch gets an unexpected ally in Syn. But can he trust the male—or is the warrior with the bad past a deadly complication?

With time running out, Jo gets swept up in the fighting and must join with Syn and the Brotherhood against true evil. In the end, will love true prevail…or was the prophecy wrong all along?

3 Responses to “REVIEW: The Sinner by J.R. Ward”