The Theory of Attraction:...GULP!… Just so you know, I’m STILL trying to calm down after reading this book!! Let me start this review by saying that I haven’t read a LOT of Erotica. The few I’ve read have ranged from Awesomely Hot to Unbelievably Creepy. But I want to get 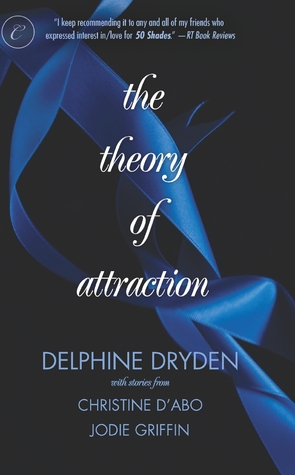 outside of my comfort zone in the types of books I read so I’m going to go on this journey, and if you like, feel free to join me, ok?

This book was an anthology; three stories by three authors. I read somewhere that these three authors were at the top of the Erotica genre. I figured that I should start with the best and go from there.

The Theory of Attraction by Delphine Dryden starts the book off with a bang! We meet Camilla (not sure she ever gets a last name). Camilla has a sexy neighbor who happens to be a rocket scientist. No, really! And his name is Dr. Ivan Reynolds. Camilla can set her watch by the schedule that Ivan keeps. She’s good friends with all the guys in her building, including Ivan. One day, after some of the guys had been over to hang out and have dinner, Ivan asks Camilla if she would help him out. He has a fundraiser to go to and to say that he’s not so great with people is a massive understatement. He wants Camilla to kind of educate him on how to talk to people in a social setting. Camilla agrees but she gets her own education as well. See, she knows far less about Ivan than she thinks she does. Ivan is into being a Domme and he decides to introduce Camilla to what it’s like to be his Sub. I love Camilla and Ivan together! He is so stiff and nerdy and you have no idea that all of this naughty stuff is under the surface. And Camilla is great. She’s so normal and unsuspecting and when she finds out what Ivan is really like, she’s just blown away! There is nothing lacking in character development and I was laughing out loud several times while reading this book. And it should go without saying that the sex was hot!

A Shot in the Dark by Christine d’Abo was the second story and revolved around Paige Long. Paige used to be active in the Domme/Sub scene but she had a bad experience with a former boyfriend. But then she meets Carter, a fireman. He’s active in “the scene” and re-introduces her to the delights of being a Sub who is treated properly. Umm, that’s about it. I’m sure this is some kind of prequel to a larger series. Paige has a sister and a brother who have GOT to have their own stories. It was pretty short but it was a great little story. Paige and Carter have great chemistry. This story was more technical in nature, I think. It got into the rules of Domme/Sub culture more than I’ve seen before but I didn’t mind it at all. It was really educational!!

Forbidden Fantasies by Jodie Griffin rounds out the book and I think this might have been my favorite of the three. Jessica Meyers is married to Maryland State Trooper Alex Meyers. They have a happy and normal marriage and have been married for something like 10 years. Recently, Jess secretly picked up a couple of Erotic novels. She’s started fantasizing about trying out some of the things she read about in the books but she’s hesitant to talk to her husband about it. She’s afraid to admit what she wants and she’s afraid that he’ll be disgusted by the things she wants. But Alex has noticed a change in her demeanor and things are about to come to a head. Jess and Alex are the married couple that all married couples wish they were. They are happy and in love and still have a fairly active sex life. After Jess reads these books, their sex life gets even more active, even if Alex doesn’t know why! This story really seemed completely realistic. Like Jess and Alex could be a real couple; they’re thoughts and reactions are absolutely rational. This would definitely be a good story for someone just getting into Erotica. It was pretty light and slow and got into how someone new to this lifestyle might feel hesitant or guilty or dirty. I would absolutely recommend this mini story to someone who wasn’t sure if they would like racier or kinkier sex scenes.

Overall, The Theory of Attraction was a great read. Without exception, the sex scenes were REALLY hot and REALLY racy!! I didn’t feel skeevy or creeped out after reading it so automatically, it gets a thumbs up from me! I will say that it was very intense though. I usually read normal romance novels and reading this one was, at times, a little overwhelming.  Having said all that, I would certainly recommend this book to anyone with an interest in taking up this genre of novel.

The Theory of Attraction
by Delphine Dryden
Camilla can set her watch by her sexy rocket-scientist neighbor’s schedule…but she soon learns that isn’t the only thing Ivan likes to be strict about. He needs to be in charge in the bedroom as well—and Cami discovers there can be more pleasure in submitting than she ever imagined…

A Shot in the Dark
by Christine d’Abo
Carter is one of the hottest men ever to walk into Paige Long’s coffee shop. Firefighter by day, Dom by night, he’s her ultimate fantasy. But can Carter convince Paige to submit to happiness outside the bedroom, too?

« Review: Her Christmas Eve Diamond by Scarlet Wilson
Review: A Woman in a Sheikh’s world by Sarah Morgan »