In Wish You Were Here by Jodi Picoult, Diana O’Toole and her long time boyfriend Finn have been 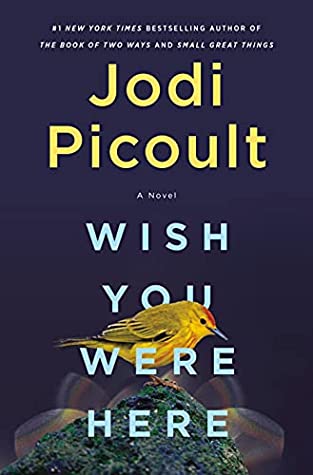 planning and saving for their dream vacation to the Galápagos for quite some time. With their fast-track careers keeping them busy–she’s an art associate specialist at Sotheby’s, he’s a surgical resident at New York-Presbyterian–a tropical island should be the perfect relaxing getaway. But the universe has other plans for them. When the first murmurings of COVID-19 appeared, Diana couldn’t imagine how it would change everyone’s lives. Let alone that she wouldn’t even be on the same continent during one of the largest crises in recent history when Finn encourages her to go without him, being that he’s desperately needed at the hospital.

‘When Finn and I booked a trip to the Galápagos, the travel agent told us it would be life-changing.
Little did she know.’

But even in the remote Galápagos things are different. The island is under lockdown as soon as Diana arrives and she makes the decision to stay for safety’s sake. Although she quickly finds she probably made a mistake. The businesses are closed–including her hotel and all of the tourist attractions. As Diana is taken in by a kind woman and begins to meet the locals, she becomes entangled in a family’s drama that will test her limits and give her new insight into what she truly wants in her life. But it leaves Diana to wonder if once this trip and the pandemic is over, what will her future actually look like?

‘It feels like massive cognitive dissonance to be in this tropical paradise and to know, half a world away, New York City is bracing for a pandemic.’

Leave it to Jodi Picoult to blow my mind and have my emotions all over the place. Unsettling yet somehow satisfying, dismal yet inspiring, Wish You Were Here was full of the real life contradictions that will forever be synonymous with the global COVID-19 pandemic.

‘We’re pushing through uncertainty, even if we can’t yet see the light at the end of the tunnel. We are battered and broken, but we’re all small miracles.’

I’m going to be honest: I have no idea how to rate this book. (lol) And I think readers will understand once they’ve taken this amazing, frustrating, heartbreaking, moving journey as well. It’s the type of book that begs to be discussed–at length–with a friend or fellow booklover to go over that shocking twist halfway through as well as all of the nuances of the story. Which means that to post a review for those who *haven’t* read it yet without giving spoilers? Not so easy.

I can say that, as with so many of Picoult’s novels that I’ve read, this one is similar in it being thought provoking and the subject matter (COVID-19) being a tad controversial. But it was dissimilar in that this is from one character’s POV: Diana’s. Usually we get to see several views on whatever subject is driving the storyline. With it being strictly from our heroine’s viewpoint, this was a much more intimate, oftentimes raw, story. Picoult wrote it in such a way that it was easy to feel Diana’s emotions; to picture ourselves in her place and wonder what choice we would have made. Would it have been the same? Totally different?

And then there was the jaw dropping, ingenious plot twist in the middle of the book. I didn’t see it coming–and I literally sat there with wide eyes, muttering “What?! What just happened?!” as I flipped through the previous couple of pages to see if I somehow skipped part of the story. What followed was almost like a different novel in a way. Because if the first part of it moved along like it was on “island time”, all leisurely and slowly finding its way forward, the second half was more like a NYC pace, going at breakneck speed and taking us along for the ride. But it fit with where Picoult took Diana’s life at those two different points. And I think every choice she made in how she told this made it that much stronger of a story.

QOTD: Do you think it’s too soon for a novel based on the pandemic? Or do you think where we are still in the midst of it that it makes a thoughtful novel such as this even more poignant?

From the #1 New York Times bestselling author comes a deeply moving novel about the resilience of the human spirit in a moment of crisis.

Diana O’Toole is perfectly on track. She will be married by thirty, done having kids by thirty-five, and move out to the New York City suburbs, all while climbing the professional ladder in the cutthroat art auction world. She’s not engaged just yet, but she knows her boyfriend, Finn, a surgical resident, is about to propose on their romantic getaway to the Galápagos—days before her thirtieth birthday. Right on time.

But then a virus that felt worlds away has appeared in the city, and on the eve of their departure, Finn breaks the news: It’s all hands on deck at the hospital. He has to stay behind. You should still go, he assures her, since it would be a shame for all of their nonrefundable trip to go to waste. And so, reluctantly, she goes.

Almost immediately, Diana’s dream vacation goes awry. The whole island is now under quarantine, and she is stranded until the borders reopen. Completely isolated, she must venture beyond her comfort zone. Slowly, she carves out a connection with a local family when a teenager with a secret opens up to Diana, despite her father’s suspicion of outsiders.

Diana finds herself examining her relationships, her choices, and herself—and wondering if when she goes home, she too will have evolved into someone completely different.