Today it is my pleasure to Welcome author Mara Wells to HJ!

Hi Mara and welcome to HJ! We’re so excited to chat with you about your new release, Cold Nose, Warm Heart! 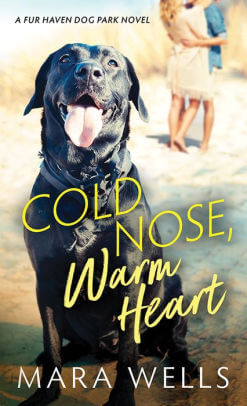 Property manager Riley Carson is still bitter about losing her promising career in hotel management when the Donovans had all their assets seized and their entire staff was pink slipped. When Caleb shows up at her building, the building she believes her grandmother owns, with big plans for developing it into a high-end condo conversion, she promises Grams that no privileged developer with a corrupt reputation is going to come and destroy their apartment building without a fight.

Caleb Donovan has one shot to redeem the family name: take the run-down art deco apartment building his grandfather bequeaths to him and turn it into a successful condo conversion. The problem? Grandpa will only sign over the property if he includes his estranged brothers in the project. An even bigger problem? Riley Carson is doing everything in her power to block him from making the changes needed to modernize.

When Caleb finds a frightened poodle on the apartment grounds during a thunderstorm, he has no idea that his quest to reunite the pooch with her owner will bring him to Riley’s door or that in the process, the dog will change his thinking about his new neighborhood. Investing in community rehabilitation by building an upscale dog park on his property will get him the permits he needs, but suddenly he finds that his decisions aren’t all based on what’s best for business. Will Riley and her beloved poodle, LouLou, convince Caleb that the future doesn’t have to erase the past?

This is a tough question, but the moment that comes to mind is when Caleb rescues Riley’s poodle during a thunderstorm, and we first see a softer side of him.

“LouLou!” a hoarse voice called. “LouLou!”
“Over here!” Caleb yelled, not sure where the voice was coming from, but hearing the pain in it and wanting to do anything in his power to make that pain stop. What could he say? Rescuing furry damsels in distress brought out his mushy side.

I would say to both Riley and Caleb the same thing that my father said to me when I was growing up: Love doesn’t keep score.

Riley woke up to kisses. Doggy kisses. And if she’d been dreaming about another kind during her unplanned nap, well, no one needed to know but her.
“Feeling better?” Caleb appeared over her, behind the couch, Aiden’s old UM sweatshirt stretched tight against his shoulders, so tight it looked like a sudden movement might tear the seams. She scooted up to sitting, bundling LouLou onto her lap for some snuggles, and saw the matching sweat pants ended well above his ankles. He looked like a little boy who’d had a mighty growth spurt. She found herself wondering who’d bought his clothes when he was young. Who made sure his shoes were never too tight, and he wore the right kind of footwear for whatever sports he played?
Riley picked up LouLou’s injured paw. Eliza had done a good job with the bandage, so she didn’t want to unwrap it yet. The poodle wriggled in her grip but didn’t act bothered by her foot at all. Riley prodded it gently, and it didn’t seem to cause LouLou any pain. Riley blew out a breath of relief. “LouLou’s apparently recovered from her ordeal.”
“She’s been racing around on that foot like it barely bothers her. I think she’ll be fine.”
“Is that your medical opinion?”
“Absolutely. But if you want to take her to a vet, I wouldn’t blame you. My medical degree is based solely on years of watching Grey’s Anatomy with my mom at an impressionable age.”
Riley laughed, really laughed. “Me, too! My mom adored that show.”
Caleb didn’t join in, just watched her, lips quirked in a crooked smile. Finally, catching her breath, she said, “I’ll keep an eye on her paw, and I’ll take her in if it seems to bother her. In the meantime, I’ll go with your prognosis, Dr. Donovan.”
“Doctor. I like the sound of that. Should I have some business cards made?”
She threw a dog bone-shaped pillow at him.
He caught it and raised an eyebrow at her. “You escalate to violence rather quickly, don’t you?”
“I don’t usually escalate to violence at all.” One hand curled in LouLou’s fur, she looked up, up, up at him. He hugged the pillow to his chest, and their eyes locked.
“Guess I bring out the best in you.” He leaned forward.
“You certainly bring out something.” Riley resisted the urge to prop herself on her elbows and lift her face toward him, but it frightened her how easily she could picture it. The distance between them closing. Their lips touching.
And then it did happen. Hands on the back of the sofa, Caleb bent down and brushed her lips with his. His eyes stayed open, watching her.
Her eyes were wide, too, and when his muscles flexed to pull away, she wrapped her free hand around the back of his neck.
“It’s okay?” His breath feathered against her cheek.
“It didn’t suck.” She stretched her neck the smallest fraction of an inch and their lips met again.
One hand braced beside her head, he grazed his lips against hers, a back and forth motion that awakened a thousand nerve endings she’d forgotten she had. And they weren’t all in her lips. With only the slightest pressure, he had her yearning for more. She clutched his neck and pulled him closer.

“You’ve been here all of two seconds, and you want to completely change the neighborhood?” She planted her hands on her hips and notched her chin up. LouLou scooted closer to his leg and nosed the back of his knee. “Are you kidding right now?”
He squatted and soothed a hand down the dog’s back. “It’s just business, honey.”
“Well, honey,” Riley sniffed and tugged LouLou toward her. She eyed him up and down like he was something she wouldn’t touch with a doggy bag. “I hope you have a backup plan. No one’s touching Grams’ place.”

My hope is that readers will take away the idea that love is for everyone, our animal friends are worth fighting for, and being part of a supportive community makes life better. Of course, I also want them to believe in happily ever after, even if the happily ever after is messy and filled with outrageous relatives.

A poodle, a black lab and a Chihuahua walk into a dog park…

All Caleb Donovan has to do to redeem his family name is take a rundown Miami Beach apartment building and turn it into luxury condos. Easy, right?

Unfortunately, that would also turn the local dog park into a parking lot and the neighbors aren’t having it. Caleb is faced with outright revolt, led by smart, beautiful building manager Riley Carson and her poodle, LouLou.

For Caleb, this project should have been a slam dunk. But even more challenging than the neighborhood resistance is the mutual attraction between him and Riley. It would be so much easier just to stay enemies.

Can Riley and her canine sidekick convince Caleb that what’s best for business isn’t always best for the heart?

Mara Wells loves stories, but especially stories with kissing. She lives in Hollywood, Florida with her family and two rescue dogs—a poodle-mix named Houdini Beauregarde, and Sheba Reba Rita Peanut, a chihuahua-mix. To find out more, you can sign up for her newsletter at marawellsauthor.com.