Today it is my pleasure to Welcome author Laurie LeClair to HJ!

Hi Laurie and welcome to HJ! We’re so excited to chat with you about your new release, Falling for Her! 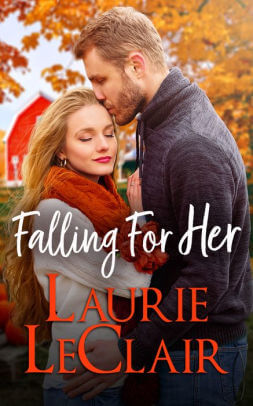 In Falling For Her, Becca, the girl next door, and Jason have been best friends forever—helping each other through thick and thin. Now, when he’s injured and at loose ends for six weeks, he returns home to Cupid’s Corner only to discover there’s more than friendship simmering between them. She’s focused on carving out a legacy on her family’s orchard by organizing a fall festival and, with her best friend’s help—the hot local TV veterinarian—and his beloved furry sidekicks, she’s bound to make a lasting impression. She’s doing her best to avoid another bad relationship while fighting the growing attraction. This time there’s so much more at stake—them and her heart. However, Jason’s willing to take that chance with the woman he’s falling for. If only he can convince Becca they are worth the risk…

“Friends, Jay. Anything else is too scary.” She had to let him go…to give him his dream, like he’d given her hers. That was what love meant.

Becca had done this for him. No big deal. No fanfare. Just with all of her heart. Gosh, he loved that woman.

“I know you’re scared, Bec. But it’s me. I’m not going anywhere.”
Jason had never asked her to give up herself or her place here on the orchard. He understood her. Her wishes. Her wants. Her dreams.

Becca gazed up into his beautiful blue-gray stare. “Jay, you’ve always been a part of my heart. I didn’t want to admit it even to myself because then I might lose that secret spot or have it crushed. I’m done running away from you and, more so, me. I know I love you. Maybe I have forever, too.”

Oh, there’s so many! First and foremost, New England, where I was born and raised. The people there, the values they hold dear, and the numerous quaint small towns inspired me to create Cupid’s Corner. Fall and all the wonderful activities that go along with it—hay rides, apple picking, pumpkin decorating, candy apples, high school football games, bonfires, and leaves changing color—are big favorites of mine and there’s no place like celebrating it than in New England. Also, my husband grew up across the street from an apple orchard and most of his family, including him, worked there for a time. His aunt worked at the orchard for nearly seventy years! It’s wonderful to hear all the family stories about making apple cider, the delicious pies, picking season, the mishaps, and the many funny adventures they shared there.

Becca’s stubborn tenacity and fierce pride surprised me. She longs for something of her own—a lasting mark to leave on her beloved family orchard. With two older brothers, she’s fighting for a chance to prove herself in her loving, well-meaning family. As I peeled back the layers, I discovered her ancestor, who’s she’s named after, coming to light. Becca wants to be as brave as the original Rebecca was—the force behind buying the once rundown orchard decades ago.

The super surprising thing I discovered about Jason was he had a stutter growing up. With Becca’s dedicated help and easy acceptance of him, Jason overcomes it. It’s a special bond they share and shapes their friendship all these years later. I always knew Jason loved animals, having rescued a dog and her litter from a burning house when he was only a teen. That led to him becoming a veterinarian. He’s not a people person, but with Becca as his best friend she’s paved the way for him to break out of that neat little box he was stuck in.

Most times, when I start a new story, I have a “framework” of my characters. I wanted to delve into the best friends to lover trope and that led me to Becca and Jason growing up next door to each other. And I loved Cupid’s Corner in New England and what better season than fall to set a story there? Out of that sprang Becca’s longing to create something all her own on the family orchard—her home she’ll never leave behind. I thought about how misunderstood her desire to stay on the orchard could be to prospective boyfriends. That’s when I tossed around ideas about Jason and having to leave his small hometown in order to get his dream job as a small animal vet. They both had dreams that kept them apart and his injury pulled them back together. Of course, that age old question—can a guy and a girl remain just friends?— played a role in the process.

I love to laugh, so my favorite scene is after Becca and Jason drums up interest for sponsors for the fall festival by going to Cupid’s Corner businesses. Tired after a long day, they head to the park beside the pond. She plops down on the wooden bench and kicks off her shoes. They joke about her sticking her feet in the water to cool off her “barking dogs”. She claims if she did all the fish would go belly up, floating to the top. But, Jason being a veterinarian, would probably try to do CPR to save them. The visual made me laugh out loud. (This shows them as who they’ve always been—comfortable together and self-deprecating. Within seconds, they gaze at each other and are suddenly highly aware of their growing feelings for each other and who they are becoming now.)

The last scene. It’s always the one where an author longs to hit the right note and give readers a satisfying ending. This scene in the book is during the fall festival—crisp cool air, hayrides coming and going, pumpkin and apple picking, lots of delicious food, the scent of wood smoke and popcorn lingering, hot chocolate and hot apple cider to quench festival goers thirst, kids laughing, and families visiting all the different booths. Becca makes it clear that she and Jason don’t have a future together. However, Jason delivers a rather unique, bold move in front of their families, high school friends who stayed in town after the homecoming game, nearly the entire population of Cupid’s Corner as well as visitors, and his TV crew—filming live. (Sorry, can’t tell you want happens next. No spoilers.)

It showcases my writing style. I write humor—well, I hope it’s funny to others—in all my books in varying degrees. Also, I write about family, friends who become family, love, hope, dreams, and places where anyone can call home and know they belong.

Love finds a way, even through the most difficult times or hardest obstacles to overcome.

I’m currently working on a Christmas short story for my newsletter readers and my next book in The Cormac Family: Billionaire Sweet Romance series. My upcoming release is His Tiny Dancer in my romantic comedy, fairy tale retelling Once Upon A Romance series.

Giveaway: An ebook copy of Falling for Her & 3 Tule ebooks of your choice

To enter Giveaway: Please complete the Rafflecopter form and Post a comment to this Q: Do you have a favorite romantic trope? If so, what is it and why?

Excerpt from Falling for Her:

The girl next door is now the woman he’s falling for.

As her ten year high school reunion approaches, Becca Thompson feels the pinch of not accomplishing enough since graduation. Romance has been an even bigger bust. Longing for more, she decides to organize a fall harvest festival and community fundraiser on her family’s orchard. But Becca gets more than she bargained for when she asks her childhood friend to help. Suddenly her bestie is making her knees weak and her heart flutter.

Jason Fox is dedicated to his veterinarian practice and raising funds to make his dream animal shelter a reality. When he’s sidelined by an injury, he takes a break and returns home to Cupid’s Corner. But from the moment he sees Becca, everything’s different. She’s no longer the young girl he picked apples and pumpkins with—she’s a self-reliant, beautiful woman.

Jason helps Becca with the festival, but the more time they spend together the harder it is to ignore the sparks. Can leaving the friend zone end in love or will it ruin everything?

Bestselling author Laurie LeClair writes romantic comedy, contemporary romance, and contemporary women’s fiction. Laurie’s habit of daydreaming has gotten her into a few scrapes and launched her to take up her dream of writing. Finally, she can put all those stories in her head to rest as she brings them to life on the page.

Laurie considers herself a New Texan (New England born and raised and now living in Texas). She lives in Central Texas with her husband, Jim, who thankfully indulges her love of chocolate and storytelling.
Website | Facebook | Twitter | GoodReads |

15 Responses to “Spotlight & Giveaway: Falling for Her by Laurie LeClair”