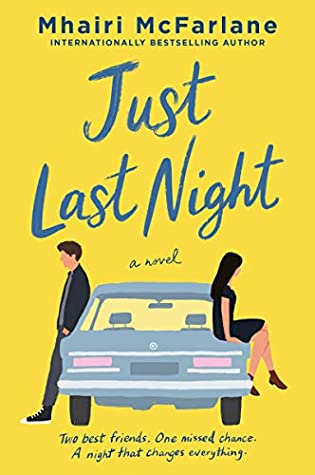 Eve, Justin, Susie, and Ed have been friends since they were teenagers. Now in their thirties, the four are as close as ever, Thursday night bar trivia is sacred, and Eve is still secretly in love with Ed. Maybe she should have moved on by now, but she can’t stop thinking about what could have been. And she knows Ed still thinks about it, too.

But then, in an instant, their lives are changed forever.

In the aftermath, Eve’s world is upended. As stunning secrets are revealed, she begins to wonder if she really knew her friends as well as she thought. And when someone from the past comes back into her life, Eve’s future veers in a surprising new direction…

They say every love story starts with a single moment. What if it was just last night?

“And once again for the cheap seats! What do Marcus Garvey, Rudyard Kipling, Ernest Hemingway, and Alice Cooper have in common? It involves a mistake. A mistake. An error. OK, back soon.”
“Hemingway was in a plane crash, were any of the others?” I whisper.
“Bit of a stretch to call a plane crash ‘a mistake’ though?” Ed whispers back and I shrug, nodding in concession.
“And Rudyard Kipling’s a bit too yesteryear for planes, isn’t he?” Justin says. “Not exactly doing his Instagram Story with a Prosecco claw holding a flute aloft in the airport bar.”
He mimes trying to photograph his pint glass, and Susie snorts.
“They were wrongly given awards that had to be taken back,” Hester says, dragging her coat off her shoulders. “Where’s the pen?”
Justin makes a skeptical face and Ed tries to look persuadably neutral as he hands it over. His sense of humor doesn’t evaporate, exactly, around Hester, but he goes more no absolutely of course I didn’t mean that formal.
Hester’s late joining tonight as she’s been out with friends at a tapas restaurant, and understandably, given the number of babies that the rest of the circle have between them, they wind things up by nine p.m. Hester only joins us at The Gladdy quiz intermittently, anyway. “Sometimes it gets wearying, with all your in-jokes,” she says. Even though she’s known us all for so long as Ed’s girlfriend, I am not sure how there’s an “in” she’s outside of.
“Are you sure?” Susie says.
“Yes, I’m sure,” Hester says. Qualifying: “. . . Well, have you got anything better?”
“Sure, sure—or four-Proseccos-deep-and-we-haven’t-got-anything-better-yet, sure?” Susie persists, smiling in a “Wicked Queen with a red apple” sort of way.
She dares with Hester in ways I absolutely do not dare. Susie dares with most people. Most people don’t dare back.
Susie has long, thick blond-brown hair she wears in a horse-mane-length ponytail, or loose and bunched up into a scarf like she’s Streisand in a seventies film. She has a full mouth with an emphatic pout to her top lip, which looks as if it’s being pulled upward by her tilted nose, which I think is a thing called “retroussé.”
“What award did Marcus Garvey get?” Justin says.
“Rear of the Year?” I say, and Ed hoots. Hester’s fuming, I know.
“OK, ignore me then!” Hester says. “Pardon me for trying to participate, guys.”
“No, no! It’s good! I think you’re right,” Ed says, hastily. “None of us have anything better. Write it down.”
I always respect Ed for leaping chivalrously to Hester’s defense, while wishing it was for someone who better deserved it. Hester scribbles while Justin, Susie, and I try not to meet each other’s eyes.
“More drinks I think, what’s everyone having?” Justin says and gets up to go to the bar.
I go to the loo and, after I flush, I see I have a text from Susie. (Not a WhatsApp, because it would risk appearing in full on a lock screen. Canny.)
When I open it, I see it’s been sent to myself and Justin. I know how they’re triangulating the signal, next door—Justin nonchalantly studying his handset while waiting to be served, Susie slightly angled away from the couple, feigning picking up her messages.

Susie: WHY IS SHE SUCH A BOSSY ARSEHOLE THOUGH
Justin: She can get away with anything due to the fabulous breasts, darling
Susie: I have great tits and you don’t see it affecting my personality. That answer is SO OBVIOUSLY WRONG. And why is Ed such a wimp about it. Oh yes write that bollocks down, my precious little poison dumpling. ARGH
Justin: Again, boobs
Eve: The poisoned dumplings
Susie: I swear she knows it’s the wrong answer and is doing it to fuck with us

I lean against the pleasantly chilly wall in the loo and type, grinning.
Having been in stone-cold love with Hester’s other half for the best part of two decades means I never know how much of my dislike is plain old envy. Susie and Justin continually—and inadvertently, because they absolutely don’t know—reassure me I’d have disliked her anyway. I often play Nice Cop in regards to Hester, to further throw everyone off the scent.

Eve: You wait, she’ll be right and that’ll show us
Susie: She’s not right, she doesn’t even know who Marcus Garvey was, you could see that when Justin challenged her
Justin: She probably thinks he won Best Video 2007 at the Grammys
Susie: Lol. And I’d just point out that Eve’s suggestion got shot down and she didn’t get the hump
Eve: Does this say anything bad about my breasts
Susie: Only that they’re not a carbon offsetting scheme for being a horror
Justin: Sigh. Let us get drunk.

Excerpt. ©Mhairi McFarlane. Posted by arrangement with the publisher. All rights reserved.

Giveaway: 5 Print copies of JUST LAST NIGHT (US only)

Sunday Times bestselling author Mhairi McFarlane was born in Scotland and her unnecessarily confusing name is pronounced Vah-Ree. After some efforts at journalism, she started writing novels and her first book, You Had Me At Hello, was an instant success. She’s now written five books and she lives in Nottingham with a man and a cat.