Hi Meg and welcome to HJ! We’re so excited to chat with you about your new release, Late Bloomer! 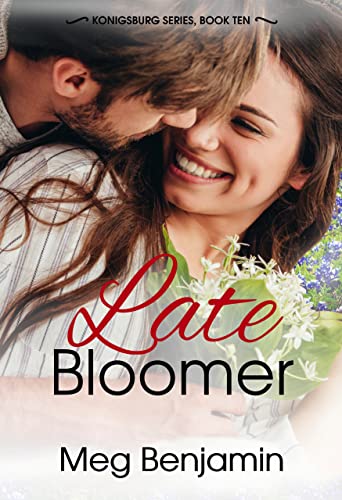 Gray Temple has been suspended from the family law firm over a disputed divorce settlement, and he’s not happy. He’s stuck in Konigsburg, Texas, doing odd jobs like working at his brother’s BBQ joint. Gray knows he need to do something besides snarling over his suspension, but he’s in a permanent funk.
Amanda Sunderland is more harassed than angry. She needs help at her garden store and she’s worried that her son’s wealthy father may try for custody with his new fiancée. When Gray offers to fill in at the shop, Amanda takes him up on it.
As the two get to know each other better, friendship turns to something hotter. Gray finds he’s a lot happier, and Amanda finds a whole new use for fudge sauce.
But when Amanda’s son Vic and his best friend Daisy Toleffson disappear, everyone panics. Gray and Amanda need to find the kids, and Gray needs to win back his reputation. But can he stay with Amanda if he goes back to the family firm and the big city?

All the Konigsburg books (Venus In Blue Jeans, Wedding Bell Blues, Be My Baby, Long Time Gone, Brand New Me, Don’t Forget Me, Fearless Love, Hungry Heart, So Happy Together) have titles that are also song titles. Some of them, like Wedding Bell Blues, were naturals. Others, like Don’t Forget Me, went through a couple of alternatives until I found the right fit (in that case, I heard Neko Case’s version of Don’t Forget Me as I was driving down the highway and went “That’s it!”). With Late Bloomer, I knew I wanted a title that related to flowers (they’re important to the story), and one day Late Bloomer popped into my head. But I had no idea if there was a song titled Late Bloomer. So I went to iTunes to check. As it turned out, there were several. Ironically, one of them was a song by the Secret Sisters that I actually owned and liked. I hadn’t realized the title was Late Bloomer. The chorus ends: “It doesn’t matter when you bloom; it matters that you do.” And that’s just perfect.

My hero, Gray Temple, is having a tough time. He’s been wrongfully suspended from his law firm, and he’s sinking into anger and (although he doesn’t acknowledge it) depression. Amanda, my heroine, represents a kind of serenity that helps pull him out of his mood. They share a love of wildflowers and the outdoors that Gray had forgotten he had. In Amanda’s case, she’s been immersed in the daily grind of running a business and raising her son with the help of her large extended family. Around Gray, she’s more than a mom or a boss; she’s a sensual, loving woman.

One crisis that builds throughout the book concerns Amanda’s son, Vic. Vic’s friend, Daisy Toleffson (familiar to Konigsburg readers from Be My Baby) wants to run away to her grandmother in Iowa because her stepmother is pregnant (Daisy’s used to being the center of attention). When Daisy takes off, Vic goes with her even though he doesn’t want to run away himself—he’s worried about his friend. Gray and Amanda, along with half the town of Konigsburg, spend the day trying to find the runaways. When they finally locate them in a little town a few miles away, Amanda’s simultaneously furious with him and heartbroken that he’d leave her. Vic, on the other hand, is just overjoyed to be reunited with his mom and longing for forgiveness. Every time I read their reunion, I get teary. Here’s a bit of it:

“Victor Parnell,” she said. “Why did you run away?”
He knew he was in terrible trouble then because his mom never called him Victor unless she was seriously mad. He tried to think of something to say, but his mind was a blank. He dropped the burger on the paper wrapper, pushed himself up, and ran around the end of the table, throwing his arms around his mother’s waist and burying his face against her. “Mama,” he sobbed. “Oh, Mama, I’m sorry.”

For a lot of reasons! If you like romances set in quirky small towns, my Konigsburg books are right up your alley. If you’ve read the Konigsburg books, Late Bloomer will give you a chance to catch up on a lot of your favorite characters. If you haven’t read the Konigsburg books, Late Bloomer is a good place to start. Like all the books in the series, it’s a stand-alone. But it’ll give you a taste of the Konigsburg style, so you can dip into the others as you please. Finally, it’s a relaxed and relaxing read. Nobody’s too nasty (although there are definitely a few villains here and there), and everything works out. What more can you ask?

I’m already working on the next Konigsburg book, tentatively titled The Road To You. It’ll give me a chance to talk about the Texas music scene, which I touched on in Fearless Love.

Giveaway: I’m giving away a $15 Amazon gift card to a commenter

To enter Giveaway: Please complete the Rafflecopter form and Post a comment to this Q: What’s your favorite small town romance (movies count, too)?

Strong Blooms Take Time.
Gray Temple is an angry man. He’s been suspended from the family law firm over a disputed divorce settlement, and he’s hiding out in Konigsburg, Texas, working at his brother’s BBQ joint and living in his cousin’s old apartment. Even as he nurses his fury at the injustice of it all, Gray suspects he needs to pull himself together. He just doesn’t exactly know how.
Amanda Sunderland is a little angry herself. She’s short two employees at her garden store and trying to deal with the possibility that her son’s wealthy father may want custody for himself and his new fiancée. When Gray offers his services as temporary help, Amanda’s happy to grab him.
As the two get to know each other better, grabbing takes on a whole new meaning. The heat between them makes Gray begin to see Konigsburg’s charms and Amanda begin to rethink the advantages of staying single.
But when Amanda’s son Vic and his best friend Daisy Toleffson disappear, panic hits Konigsburg. Can Gray and Amanda find the kids? Can Gray win back his reputation? And can he stay with Amanda if he goes back to the family firm?
It’s Konigsburg, y’all. Anything can happen.
Book Links:  Amazon | B&N | iTunes | kobo | Google |

Meg Benjamin is an award-winning author of romance. Meg’s Konigsburg series is set in the Texas Hill Country and her Salt Box and Brewing Love trilogies are set in the Colorado Rockies (all are available from Entangled Publishing). Along with contemporary romance, Meg is also the author of the paranormal Ramos Family trilogy from Berkley InterMix and the Folk trilogy from Soul Mate. Meg’s books have won numerous awards, including an EPIC Award, a Romantic Times Reviewers’ Choice Award, the Holt Medallion from Virginia Romance Writers, the Beanpot Award from the New England Romance Writers, and the Award of Excellence from Colorado Romance Writers.
Website | Facebook | Twitter | Instagram | GoodReads |

« REVIEW: Nora Goes Off Script by Annabel Monaghan
REVIEW: A Diamond for My Forbidden Bride by Jackie Ashenden »