Today it is my pleasure to Welcome author Lee Tobin McClain to HJ!

Hi Lee Tobin and welcome to HJ! We’re so excited to chat with you about your new release, Low Country Dreams! 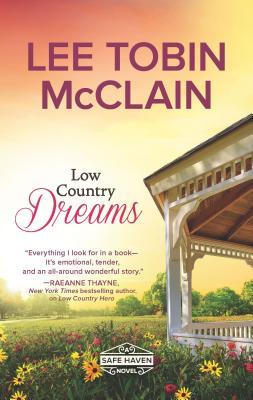 A woman fears her mentally-ill brother may have had something to do with a missing woman and she’ll do anything to protect him…even lie to her old love, who’s the police officer charged with investigating the crime.
As a police officer in the small southern town of Safe Haven, Liam O’Dwyer avoids his ex-girlfriend Yasmin Tanner at all costs. He still has feelings for her, even though she broke his heart when she left him with no explanation years ago. When a young teenager arrives at the women’s center Yasmin runs, clearly traumatized and without his parents, it’s Liam’s job to uncover what happened to the boy’s missing mother. Yasmin offers to help and as they work together, the old feelings they’ve both tried so hard to bury come roaring back to life. Desire and something even more powerful–love–is rekindled. But as secrets are unraveled and betrayals revealed, will they lose their second chance at their first love?.

WORKING LATE IN a small Southern town shouldn’t feel this creepy.
Yasmin Tanner looked out the office window of the church where the Safe Haven Women’s Center was located. Live oaks draped with Spanish moss broke the moonlight into a crisscross pattern. Lighted upstairs windows in a few houses along the street indicated that other night owls were still awake.
Awake, although safely ensconced at home with their families.
Maybe it wasn’t creepy so much as just lonely.

I had so much fun researching the setting for this book—the gorgeous, mysterious South Carolina low country. In book one, Low Country Hero, the main setting was a rustic beachfront resort, so my first research trip involved a lot of beach walking and nature study. In Low Country Dreams, the main setting is the small town of Safe Haven where Liam is a police officer. So my second research trip involved a stay in Georgetown, South Carolina, where I could people-watch, eat shrimp and grits, walk the boardwalk, and generally soak up the small-town atmosphere.
If you’ve read any of my books, you’ve probably guessed I’m a dog lover. Not only are dogs a huge comfort in real life, but they also cause trouble, which can help move a plot forward. In Low Country Dreams, Liam’s misbehaving Lab-rottweiller mix, Rio, bears some resemblance to my own misbehaving Goldendoodle.
Love and romance aren’t only for the young! As a fifty-something myself, I enjoyed writing the secondary love story of Rita, an older waitress at the Safe Haven diner who turns out to be the long-missing mother of the O’Dwyer brothers. She falls in love with the diner’s manager, but their romance takes many twists and turns… it takes three whole books for them to finally commit for the long term.

I already knew Liam from his role in Low Country Hero, so he was easy to write. He’s a handsome, loyal, small-town cop with an angsty background—just the kind of hero I adore. Yasmin, though, surprised me time after time. I knew she was a nurturer, the head of the women’s center, but I didn’t know that she:
• Has a dearly-beloved older brother who’s struggling with severe mental illness;
• Is the country-club daughter of a doctor and has a difficult relationship with her mother
• Takes on the teenage son of one of her clients as a foster child, simply because she cares about the boy and there’s no one else to do it.

Dinner at Ma Dixie’s low country cottage! Ma Dixie is a mother figure to all three O’Dwyer boys, and her humble home is a frequent gathering place for them… and a testing ground for the women they fall in love with. Plus, she’s a great southern cook! Here’s the scene when Liam takes Yasmin out to Ma’s place:

When they went inside to eat, Liam ended up sitting right next to Yasmin, so close their shoulders touched at the small wooden table. There was seafood gumbo, and pulled pork, with sides of collards and cornbread and baked mac and cheese. After eating until they were stuffed, they all somehow found room for Ma’s peach cobbler. Cash told stories of his high-living business deals that had Ma’s foster son wide-eyed, and Ma and Pudge shaking their heads.
Liam watched Yasmin as she dug into the food and laughed at all the right places. There was a fine sheen of sweat on her face, which gleamingly revealed how little makeup she wore. She’d pulled her long curls back into a ponytail, with some kind of braid going along one side. It made her look more like she had in school, young and innocent. For once, the tension had left her shoulders and her eyes were clear.
He was glad he’d brought her. Ma’s place was good for the soul. Yasmin carried too much and deserved a chance to kick back and relax with good people.
Only problem was, he was having a hard time keeping his hands to himself, especially when she threw her head back, laughing at one of Pudge’s silly jokes. The long column of her throat seemed to beg to be kissed. When she pulled her shirt away from her chest and stomach, flapping it a little for air, he wanted to fan her, make her comfortable.
Make her happy.
And those were thoughts he didn’t need to be having.

Two things: first, that individuals and families struggling with mental illness need our support, and second, that love and community can get us through life’s most difficult circumstances.

I’m really excited about Low Country Christmas, the third and final book in the Safe Haven series, featuring the third O’Dwyer brother. Cash O’Dwyer is wealthy, successful, charming… and extremely independent. So when a beautiful woman shows up on his doorstep with a baby she claims is his… let’s just say it turns his life upside down.
Meanwhile, my next Love Inspired novel, The Nanny’s Secret Baby, releases in July, and has the most adorable cover ever! And I’m working on a new series featuring K-9 police officers rebuilding their lives after becoming disabled, set on the Jersey Shore.

Giveaway: A copy of LOW COUNTRY HERO by Lee Tobin McClain – the first in the Save Haven series.

To enter Giveaway: Please complete the Rafflecopter form and Post a comment to this Q: Do you like coastal settings for romance novels? What’s your favorite beachfront location?

Return to Safe Haven, where a new beginning with your first love is only a heartbeat way…

Yasmin Tanner has devoted her life to making other people’s dreams come true. But between running Safe Haven’s women’s shelter and caring for her brother, the long days—and lonely nights—are catching up with her…until Officer Liam O’Dwyer knocks on her door. She had good reasons for breaking Liam’s heart all those years ago, but that hasn’t made sharing their small town any easier. She’s missed him—that’s painfully clear to her now. But that’s not the only secret she’s keeping from him…

Ever since Yasmin left, Liam has kept his head down and his chin up. But when a woman from Yasmin’s shelter goes missing, leaving her teenage son alone, it hits home for Liam. He’ll do whatever it takes to reunite this family…even work closely with the one woman he can’t forget. Yet as late summer days turn into cozy autumn nights rekindling the past, Liam suspects Yasmin is hiding something. And where her loyalties fall could mean the difference between lost love and a second chance at forever.

Lee Tobin McClain read Gone With The Wind in the third grade and has been an incurable romantic ever since. The PW bestselling author of eight contemporary romances for Harlequin Love Inspired and twenty independently-published novels and novellas, she recently contracted with Harlequin HQN to write three mainstream romance novels, coming in 2019. When she’s not writing, she’s probably cheering on her daughter at a gymnastics meet, mediating battles between her goofy goldendoodle puppy and her rescue cat, or teaching aspiring writers in Seton Hill University’s MFA program. She is probably not cleaning her house.
Website | Facebook | Twitter | Instagram | GoodReads |