Today, HJ is pleased to share with you Jean Meltzer’s new release: Mr. Perfect on Paper

From the author of the buzzy THE MATZAH BALL, a pitch-perfect romcom about a matchmaker who finds her own search for love thrust into the spotlight after her bubbe outs her list for “The Perfect Jewish Husband” on live television. 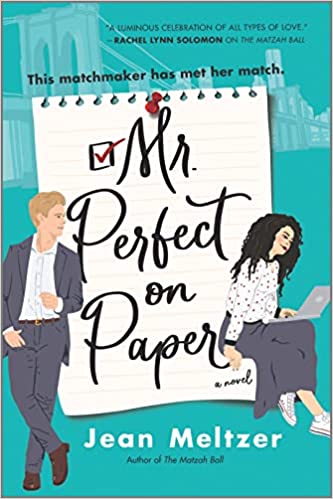 Dara Rabinowitz knows a lot about love. As a third-generation schadchan, or matchmaker, she’s funneled her grandmother’s wisdom into the world’s most successful Jewish dating app, J-Mate. Yet, despite being the catalyst for countless Jewish marriages, Dara has never been successful at finding love. Oh, she’s got plenty of excuses—like running a three-hundred person technology company and visiting her beloved bubbe every day. But the real reason Dara hasn’t been on a date in three years is much simpler. Though she desperately wants to meet her bashert, and stand beneath the huppah, she is frozen by social anxiety.

All that single dad Chris Steadfast wants to do is give his daughter stability. But with the ratings for the TV news show he anchors in the gutter, and the network threatening cancellation, Chris’s career – like his life with Lacey in Manhattan — is on the chopping block.

When her bubbe outs Dara’s list for “The Perfect Jewish Husband” when they’re guests on Chris’s live show, Chris sees an opportunity to both find Dara her perfect match, and boost the ratings of his show. But finding Mr. Perfect on Paper may mean giving up on the charming—and totally not Jewish—reporter following Dara’s nationwide hunt…

Enjoy an exclusive excerpt from Mr. Perfect on Paper

Giveaway: 3 Finished print copies of Mr. Perfect on Paper by Jean Meltzer for US/CA entrants only

Jean Meltzer studied dramatic writing at NYU Tisch and has earned numerous awards for her work in television, including a daytime Emmy. She spent five years in rabbinical school before her chronic illness forced her to withdraw, and her father told her she should write a book – just not a Jewish one because no one reads those.

« REVIEW: The Magic of Lemon Drop Pie by Rachel Linden
Spotlight & Giveaway: The Secret of Bow Lane by Jennifer Ashley »