Today it is my pleasure to Welcome author Audrey Wick to HJ!

Hi Audrey and welcome to HJ! We’re so excited to chat with you about your new release, On the Market! 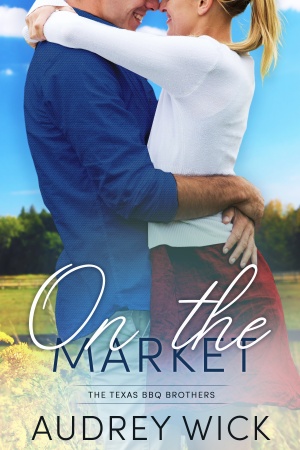 ON THE MARKET is a contemporary romance set in Last Stand, Texas, a fictional town that was created as a multi-author project for Tule Publishing. In it, two brothers—Hutch and Cole—are third generation locals who are taking over the family business of a barbeque market. Hutch meets Valerie, a city girl from San Antonio who inherits her grandmother’s bungalow in Last Stand. She feels like a fish out of water, especially when she’s tasked with renovations that go awry, thanks in part to Hutch. Their sweet and saucy styles don’t initially mix, but they have a fun journey toward finding their recipe for happiness.

Hutch squared off with Cole across a table in the dining area of their family business. Hutchinson’s barbeque market may be an institution in Last Stand, Texas, but the way the brothers had been feuding lately made the restaurant’s interior seem more like a wrestling ring.
Cole splayed his hands wide, stretching each finger before slackening them enough to continue hammering his latest ideas.

My editor and I discussed the spelling of “barbeque,” which can also be spelled as barbecue, BBQ, bar-b-que, and others. To be authentic to the Texas setting, we settled on the use of the “q” in barbeque. It sounds like a feud the brothers in my book would have, but, believe me, we were much more polite about it!
There are also some barbeque-inspired recipes in the back of the book. All are original from my own kitchen. So if readers get food cravings while reading, they have an outlet for dealing with them. I hope readers enjoy these!

Hutch is the older brother and co-owner of The Hut. He believes in honest work and doing right by others. He also takes a more traditional approach to running The Hut. Cole, the younger brother and pitmaster, wants to modernize. He gets restless at the grill, so he experiments with renovation ideas and even tries grilling vegetables, which Hutch abhors. As I wrote the brother scenes, I was surprised how easily the dialogue and teasing flowed between them. Writing siblings presents a whole new set of challenges aside from the hero/heroine storyline, but I loved exploring those scenes.

There’s a scene in the book where the characters are gathered around a backyard firepit, sipping beverages, sharing conversation, and roasting s’mores beneath a clear evening sky. I’d like to see actors convey the ease of this scene:

Setting is an important element of my writing, and I hope readers experience a deep sense of place by reading this book. My heroine is dealing with past memories tied to a sense of “home” in the book, so if my readers can connect with her emotionally, they’ll understand my use of setting on more than one level.

My next release is August 13. It’s called OFF THE MARKET, which is the duet book to ON THE MARKET. Readers get to follow younger brother Cole Hutchinson. Whereas his older brother is a traditionalist, Cole takes a more modern approach to running The Hut. The barbeque brothers continue to clash, but there are also some sweet surprises in Cole’s romantic future. It’s a perfect book that readers can enjoy as they slide out of summer.

Giveaway: Tule swag and copy of ebook On the Market by Audrey Wick

To enter Giveaway: Please complete the Rafflecopter form and Post a comment to this Q: What is your favorite summertime, picnic-inspired food? Bonus if you want to link to an online recipe that’s easy to share.

Excerpt from On the Market:

Will she be the secret ingredient to his happiness?

Valerie Perry has just inherited her grandmother’s home in Last Stand, Texas, a far cry in the country from her city life as an organic grocery buyer in San Antonio. Her methodical daily routine suits her just fine, so she aims to freshen up the property, sell it, and take her funds back to the city. She’s only got two weeks during her vacation to make this happen. Now is the time to cash in and get out.

The oldest Hutchinson son, who people around town know as “Hutch,” is a third generation local who is poised to take over the family business with his brother, Cole. The barbeque brothers have very different ideas about the future of their restaurant, “The Hut.” Just when he thought his biggest headache was his job, Hutch meets Valerie and both their worlds are upended. He’s drawn to this fish out of water, but Valerie’s time in Last Stand has an expiration date.

Their sweet and saucy styles don’t mix, but can they both find the recipe to a happy future?

Audrey Wick is a full-time English professor at Blinn College in Texas. Her writing has appeared in college textbooks published by Cengage Learning and W. W. Norton as well as in The Houston Chronicle, The Chicago Tribune, The Orlando Sentinel, and various literary journals. Audrey believes the secret to happiness includes lifelong learning and good stories. But travel and coffee help. She has journeyed to over twenty countries—and sipped coffee at every one.
Website | Twitter | Instagram | GoodReads |

« REVIEW: Window on the Bay by Debbie Macomber
Spotlight & Giveaway: Crashing the A-List by Summer Heacock »

27 Responses to “Spotlight & Giveaway: On the Market by Audrey Wick”