Today it is my pleasure to Welcome author Charlee James to HJ!

Hi Charlee and welcome to HJ! We’re so excited to chat with you about your new release, Six Days of Spring! 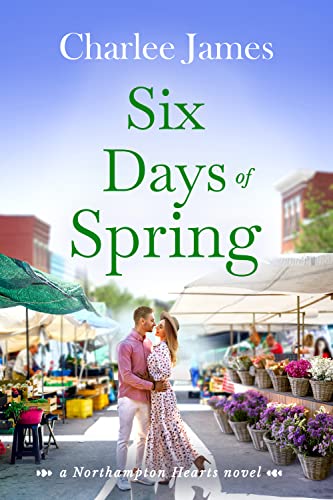 Dahlia and Tristan’s story is an enemies to lovers romance. I enjoyed setting this book in spring, a time of fresh growth and new beginnings—exactly what the hero and heroine experience together. Dahlia, a free-spirited potter, rallies around her sister after an accident and finds herself in a new city, knee-deep in preparations to ready her only sibling’s gift shop, The Pickle and Preserve, for the Annual Spring Six Farmer’s Market. Trouble and attraction brew when Tristan, a guarded businessman linked to her past, makes her question a decades-old family feud. Together, they learn that trusting themselves is the most important step in learning to trust each other.

“I didn’t peg you for a liar.” The deep, monotone voice behind her sparked something to life, a small flicker in her hollow chest. Something she vehemently snuffed out and pushed aside. No way she was paying attention to the odd stirrings in her body when he was near. Just no.

The light pouring through the stained glass window splashed rainbows on her skin. Those wide eyes were alive with appreciation, one hand paused just a few inches from the pane of glass. “This is incredible.” She seemed to forget where she was, soaking up the glory of the colors, while he stood, utterly staggered by the picture she made.

“That’s always been my favorite part of the building. The way the light hits it in the late afternoon is nothing short of stunning.” Like you.

My parents would take us to the Flower and Garden Show in Boston when I was younger. The walk-through floral displays were enchanting, like you were stepping into a different world. I loved using this as inspiration for the setting.

Both main characters have disbeliefs about themselves that are proved wrong by the end of the story. We all have hang-ups, and sometimes our worst enemy is the self-doubt within us. After trusting the wrong man, Dahlia Reynolds questions her strength and judgment. She might be a free spirit, but a deep sense of loyalty has always bound her to her family. She’s let opportunities pass her by to be there for her loved ones.
Tristan Stoll believes he will always live in the shadows of his father’s mistakes. His ethical lifestyle is unwavering, and yet he still feels responsible for the livelihoods that were crushed under the weight of his family’s demands. Tristan will have to forgive himself before he accepts the love offered to him.

I love the give and take that developed between these characters. Dahlia’s earned trust makes Tristan see himself in a different light. At the beginning of the book, Dahlia is the one fighting to protect Tristan, but when Dahlia is having moments of self-doubt, the tables are flipped, and Tristan gives his all for Dahlia.

Her pulse was racing as she fled toward the elevator ducking in and out of Spring Six patrons. Yesterday, when she’d been hauling boxes to the second floor, she’d discovered a service elevator. No one would be using that right now, and she really needed to be alone. She bypassed the long line at the main elevator and crossed the hall to the more cramped but blessedly quiet one. Exhaustion weighed on her when she was safely inside the steel box, and every muscle in her body was drained. Emotionally from the argument with her dad, she hated seeing the people she loved hurt or angry. Also, it felt as though she was betraying her family by grappling with this intense attraction to a man they’d never approve of.
A long breath whistled through her teeth, and she hit the button for the ground floor. The steel panels were almost shut when a hand shot through the opening, stalling its progress. Her heart pounded, and the warmth flushing through her body was now more than just anger because Tristan was standing just outside the elevator. He was right there, clad in dark, fitted jeans and a collared shirt. The scowl on his face added to the wounded aura surrounding him. He moved forward, erasing the distance between them. With each step he took, she longed to move closer, but her feet were effectively cemented to the floor. The onslaught of sensations as he stalked toward her was nearly too much, but not even close to enough. She shouldn’t want him. Even though Tristan wasn’t at fault specifically, her family didn’t seem to accept that solid piece of information. She’d centered her whole young life around Lacey and her parents. Trying to do what was right, what was the most helpful while they worked. Right now though? Right now, she wanted something reckless all to herself. And that reckless something had fixated on her with feverish eyes. Tristan punched the button to close the elevator doors and hit the button for the ground floor of the building. Away from the crowded festival floor and her angry father. One more step and he was standing directly in front of her. The backs of her arms touched the cool elevator wall as Tristan caged her in. He waited one beat, then two, and when she nodded her head in encouragement he erased what little space was left between them.

This scene evolves after an intense moment between Tristan and Dahlia’s father. No one is perfect, and Dahlia’s father has struggled to be present in his daughter’s lives after losing his business. His misplaced anger toward Tristan is driving a wedge between him and his oldest daughter, and in this scene, Dahlia sides with Tristan.

“Please promise me you won’t agree to what my father asked.” She glanced up, her eyes locking on his; the passion swirling beyond her lids gripped his heart.
“What’s that?” His voice had turned to smoke and ash with that one heated glance.
“That you’ll stay away from me. Maybe I’m kidding myself. How could you want anything to do with me or my family? We’ve treated you like a pariah and a thief and—”
His heart clenched at the misery in her voice. She had to stop. The pain in her words was muscle tearing from bone. Fire scorching flesh. He gripped her shoulders firmly. “Do you really think it’s in my power to stay away from you?”

Don’t let perceived flaws hold you back from taking what you want from life. It is okay to be human, and it is okay to feel how you feel.

The second book in the Vision series from Evernight Publishing is coming soon! I loved writing this emotionally-intense romantic suspense between two broken characters who, by sheer will, have taken their experiences and used them to help others.

Giveaway: A $15 digital Amazon gift card and a signed copy of Six Days of Spring (US only)

To enter Giveaway: Please complete the Rafflecopter form and Post a comment to this Q: For the chance to win a $15 digital Amazon gift card and a signed copy of Six Days of Spring, share if you have a green thumb or if you prefer plants of the faux variety. It’s kind of a toss-up for me. I love plants and flowers, but I tend to kill them. I’ve found that if I stick to air plants or cactus I can enjoy keeping plants without the guilt. Thank you for joining me! -xoxo Charlee

Excerpt from Six Days of Spring:

Thrown back into a decades-old family feud, she discovers not all is fair in love and war.

When free-spirited potter Dahlia Reynolds and her dad take over running her sister’s shop, The Pickle and Preserve, for a six-day spring farmer’s market, she doesn’t expect to run into Tristan Black, the son of the man who greedily destroyed her family’s business. Despite learning he’s a commercial property owner like his father, Tristan seems different. Dahlia discovers he’s shy but charming, honest, and committed to helping his community. Her father is unforgiving, but Dahlia believes everyone deserves a second chance, and she’s giving Tristan his.

Tristan Black has lived in the shadow of his father’s mistakes since he was a teen. He’s determined to shed the aura of mistrust that plagues his family name, but his past is never far behind. When Tristan sees Dahlia again, the secret crush he had on her when they were kids blossoms. He longs for another chance with her, but how can they build a future when the past and her father’s fury surround them?

Contemporary Romance Author Charlee James was introduced to a life-long love of reading listening to her parents recite nightly stories to her and her older sister. Inspired by the incredible imaginations of authors like Bill Peet, Charlee could often be found crafting her own tales. As a teenager, she got her hands on a romance novel and was instantly hooked by the genre.

After graduating from Johnson & Wales University, her early career as a wedding planner gave her first-hand experience with couples who had gone the distance for love. Always fascinated by family dynamics, Charlee began writing heartwarming novels with happily-ever-afters.

Charlee is a New England native who lives with her husband, daughters, two rambunctious dogs, a cat, and numerous reptiles. When she’s not spending time with her tight-knit family, she enjoys curling up with a book, practicing yoga, and collecting Boston Terrier knick-knacks.
Website | Facebook | Twitter | Instagram | GoodReads |

« REVIEW: Every Summer After by Carley Fortune
Spotlight & Giveaway: The Stand-In by Lily Chu »