Today it is my pleasure to Welcome author Carmen Falcone to HJ!

Hi Carmen and welcome to HJ! We’re so excited to chat with you about your new release, Sold to the King!

Thanks so much for having me! Hi everyone 🙂 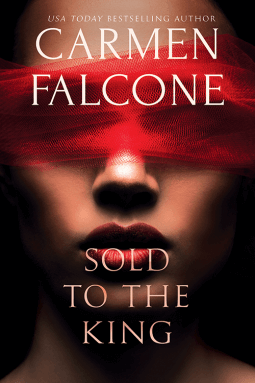 The heroine is so loyal, smart and caring, it’s hard not to relate to her. And the hero is super hot but also carries a huge weight on his shoulders. Soon, he’ll be crowned king and he vows to put his kingdom’s needs above his own.

This scene made me blush. They’re having a pinic in the woods, and to distract him from getting too personal, she gets intimate with him for the first time.

Nassor held her chin up, giving her no choice but to stare into his eyes. “What are you thinking about?”
She cleared her throat. Shit. Do something. She slid a leg over his torso, straddling him. His rock-hard body felt stronger than ever. She wrapped her arms around his neck, reveling in the desire flashing in the depths of his irises. “I was thinking…you said I’d climb on your bed out of free will. What happens if I just climb on you instead?”
“We shall see,” he said, his voice dropping an octave.
He placed his hand on the back of her neck, pulling her lips to his. She opened her mouth, and he took every bit she offered. Quickly, passion ignited in her core, spreading through her insides—making them sizzle. Burn.
With a groan, he thrust his fingers into her hair and pulled her to him with a possessiveness that made her squirm against him. They were in a perfect, sinful position, their bodies molding as the apex of her thighs rubbed onto his torso. God, this was…whatever guilt and insecurities had occupied her mind a moment ago, they dissipated from her completely.
He slipped his hands under the hem of her dress, fondling her legs and then her thighs. She quivered when he cupped her pussy, even through the fabric. The warmth of his strong, large hand seeped through the cotton, driving her wild for more. “Nassor,” she called, urgency lacing her voice.
Swiftly, he flipped her to the ground and rolled on top of her. Her heart raced in her chest, pounding its way up her throat. He kissed her cheeks, then pushed down her dress, exposing her bra. He pulled the cup down, and her breasts spilled into view, a hot stir tingling behind her engorged nipples.
He flashed her a beam of approval, then dipped his head and lapped his tongue at her tits. She sucked in her breath, aware of each goose bump rising on her flesh. Without delay, he took her breast in his mouth, sucking it. A rush of arousal raced down her body, settling in between her legs, making her clit throb in anticipation.
“You’re stunning, Isabela,” he whispered when he switched from one breast to the other.
He continued licking her nipple with the tip of his tongue, earning more moans from her. When he slipped two fingers inside her panties, she arched toward his hand, needing more.
Fireflies flew around them, but the thumping of her heart surpassed their buzzing sounds. Growling, he parted her super wet folds with his fingers, taking her to a world much more exotic than the country she was visiting. She thrust her fingers into his hair, caressing his scalp, hoping she’d be a fast learner to give him the incredible sensations he showed her.
He lowered himself on her body until he faced her sex. She’d seen this kind of thing on HBO before, but to be on the receiving end? Her thighs clenched, but before she closed her legs, he held them, nudging them apart. “I’m about to eat your pussy. Any objections?”

Because it’s sexy, original, and will give you all the feels!

I’m working on the third installment of this series, out in June!
My next release is called Bad Intentions, the first in the Bad Housewives Club series. It’s a sexy contemporary romance about a group of friends in their late twenties navigating.

To enter Giveaway: Please complete the Rafflecopter form and Post a comment to this Q: What skill would you auction to protect a loved one?

Excerpt from Sold to the King:

I’m less than a week away from being crowned king.
To celebrate my last days of freedom, I’m indulging in all kinds of hedonistic activities —including attending the coveted Virgin Auction.
When I see Izzy on stage, I forget where I am. She’s gorgeous. I must have her. At any cost.
Even if only for three weeks.
Even if it can only ever be temporary.
And especially because it’s the last time I can do something for myself and not what’s best for my country.
I’m bound by duty and honor, but for the next few weeks I get to have my American cake and eat her too… one decadent bite at a time.
Book Links: Amazon | B&N | iTunes | kobo | Google |

42 Responses to “Spotlight & Giveaway: Sold to the King by Carmen Falcone”