Today, HJ is pleased to share with you Natasha Madison’s new release: This Is Crazy.

From the best selling series, Something So comes the spin-off series This is… 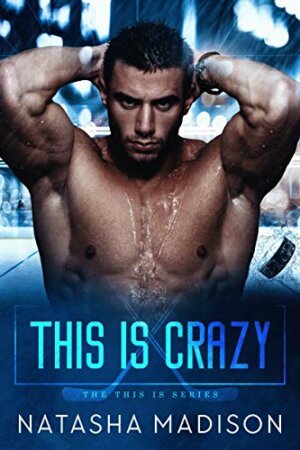 All my life, I’ve said I will never date a hockey player. I know better because I’ve seen and lived it all. My father is a hockey god, my brother is the captain of the most successful NHL team in the world, and my brother-in-law also plays in the league. Their lives are complicated, so I went in the opposite direction.

I fell in love with a scholar. But instead of proposing marriage, he broke up with me.

Three months later, I saw his engagement picture on Instagram. I couldn’t let him get away with that. No, it didn’t matter what, I was going to make that man see that I did not need him.

I was in the running to pass my point record from last year, ready to claim the number one spot in the league. On top of my game, I was riding my career high wave.

Then, Hockey’s Princess, Zara Stone tweeted me. She wanted me to crash her ex’s wedding.

The worst that could happen? A PR nightmare. The best? A fun night with a beautiful woman.

It started out as a game—something I’m good at. Her crazy idea twisted into something I wasn’t looking for, something neither of us wanted.

When push comes to shove, one thing runs through my mind: This is Crazy. Also, this is crazy right.

Enjoy an exclusive excerpt from This Is Crazy:

Zara Stone @ZaraStone
When your ex-boyfriend gets engaged, you ask his idol @EvanRichards to be your date to crash his wedding. What do you say? Wanna be my date?
#myexhasapencildick

Zoe reads it and turns to high-five me while Karrie rolls her lips, trying not to laugh. Allison puts her hands in front of her mouth, and Vivienne just nods, drinking her wine. My phone beeps, and my father looks at me. “I think he answered.”
I grab the phone from him just when I hear Karrie’s cell phone ring. Her eyes look from the phone to me. “It’s Matthew.”
“Did he answer you?” Zoe asks, and I open my Twitter.

Evan Richards @EvanRichards
Sounds like a plan. DM me.

Zoe laughs out loud. “Yeah buddy, you better DM him right now.”
“What does that even mean? Why is this happening?” My father just moans.
“It’s happening because he is a pencil dick asshole who basically lied with the whole ‘I have so much work, and I have to focus on that’ bullshit. Well, guess what? I’m going to get the last laugh,” I tell him, and he just shakes his head.
“Matthew is freaking out,” Karrie says, trying not to laugh with the phone by her ear. “Hold on, let me put him on speaker.”
“Zara.” His voice fills the room. “Are you out of your mind?” he asks in one breath and then continues. “No, don’t answer that. We all know you are out of your mind.”
“Hey, Matthew,” I say, and he stops talking. “Is it true you threw out Karrie’s vibrator?”
“Who told her that?” he hisses. “I have to be on the ice in twenty minutes. I don’t have time for this today.”
“Who asked you to get involved?” Zoe says. “I mean, you won’t even let your wife have a vibrator. She looks deprived.”
“She isn’t deprived,” he says, “and the date with Evan is never going to happen.”
“Matthew Grant,” Karrie pipes in, “don’t you dare. Your sister is brokenhearted.”
“This is going to end up on SportsCenter,” Matthew grumbles. “I have to go. Kiss the kids for me, and you twins …” I look at Zara, and she looks at me. “I’ll liquidate some stocks to make sure I have bail money.” He laughs, but my father groans.
“I see this ending very badly.” My mother laughs.
“For one of us anyway.” I smirk at her.

Excerpt. ©Natasha Madison. Posted by arrangement with the publisher. All rights reserved.

Giveaway: (3) eBook copy of THIS IS CRAZY by Natasha Madison

When her nose isn’t buried in a book, or her fingers flying across a keyboard writing, she’s in the kitchen creating gourmet meals. You can find her, in four inch heels no less, in the car chauffeuring kids, or possibly with her husband scheduling his business trips. It’s a good thing her characters do what she says, because even her Labrador doesn’t listen to her…

20 Responses to “Spotlight & Giveaway: This Is Crazy by Natasha Madison”