Today it is my pleasure to Welcome author Leah Vale to HJ!

Hi Leah and welcome to HJ! We’re so excited to chat with you about your new release, Wrangling the Cowboy’s Heart! 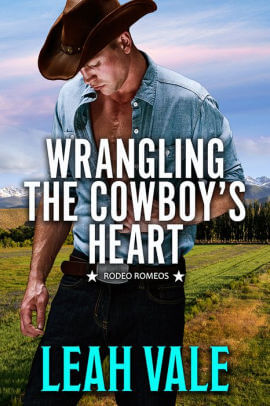 What would you do if the only person who can help you save your ranch is your secret crush and your best friend’s older brother? And the one person you can’t trust?

Amanda Rodrigues has a problem. The person who owns the note on her ranch is calling it in.

Liam Neisson’s little sister’s best friend needs help. He needs Amanda’s brand new stallion for his breeding program. Hoping to persuade her to sell him the horse, Liam agrees to help. Little did he know he’d also lose his heart.

“Big Mike watched her reemerge from the hall with unabashed interest. All he needed was a bucket of popcorn.
“Help yourself to whatever’s in the fridge, Big Mike.”
He grinned. “Thanks, Amanda.”
“While keeping an eye out for anyone who doesn’t belong or strange behavior from the horses,” Liam interjected.
Big Mike sat straighter. “Of course, boss.”
Amanda sent the ranch hand a smile of thanks.
He winked in return.
Amanda suppressed a snort. Cowboys.
Liam bent his arm again and offed her his elbow. “We should get going, Amanda. Kickoff is in ten and Caitlin is probably already starting to froth.”
She surged toward him like she’d been hit with a cattle prod. “Oh, geez. I’ve been such a bad friend. And a worse maid of honor. I should have been there with her hours ago.”
Liam opened the door for her and guided her through in front of him.
She held in a blissful sigh. Cowboys.

I pretty much grew up on the back of the sweetest little barrel racer, dreaming of living on a ranch with my life revolving around the quarter horses that make the sport of barrel racing so exciting. So when I had the chance to write another book in the Rodeo Romeos series, I couldn’t resist writing a barrel racing, ranch owning, and quarter horse loving heroine.

As I mentioned, my heroine, Amanda, has a lot in common with me, but her stubborn determination definitely evolved on its own. As did my hero, Liam’s, tenderness. I’d initially envisioned him as a mostly angry guy, always spoiling for a fight. But when he was around Amanda, he kept showing a surprising amount of empathy. While I do a lot of character development worksheets before I begin writing, the characters never fail to wander off in surprising directions as the story unfolds. It’s one of my favorite parts of writing.

My favorite scene to write was the one where Liam and Amanda are arriving at the engagement party for Liam’s sister and her fiancé—hero and heroine from book one. I love being able to revisit characters.

“Bodie spotted them first. He approached them, offering Liam his hand. “Heard you two have had even more excitement today.”
Liam accepted Bodie’s hand and shook it. “We’re handling it, Hadley.”
Bodie’s gaze shifted to Amanda. “Well, look at you. You’re even prettier out of the saddle, Amanda.” He leaned in and gave her a quick peck on the cheek.
“Thank you, Bodie.” High praise from a former Rodeo Romeo.
Liam made a noise and Amanda shot him a glare. He was looking at Bodie as if mentally calculating the size of the hole he’d need to dig in the ground to stuff Bodie in.
Bodie grinned.

Probably the most difficult scene to write was the one where Amanda and Liam are sitting in a field, looking down at the overgrown landing strip. I really wanted to get it right.

“He studied Amanda, struck again by how pretty she was. Had she always been?
Her gaze was fixed on a spot in front of them. The grass grew sparsely there, and he realized it look similar for about twenty or thirty feet and extended in either direction for the length of a couple football fields.
Understanding slammed into him. She was staring at the homemade landing strip her father had cut into the earth for his small, single-prop airplane.
The airplane he and her mom had lost their lives in when it crashed into a faraway mountain one snowy night.

I think Wrangling the Cowboy’s Heart definitely showcases my style. I can’t seem to keep my snarky sense of humor off the page.

To go for what you really want in life. Taking a risk is scary, but that is how the good stuff happens.

I just finished book three in the Rodeo Romeos series. Ian’s book will be my next release.

Giveaway: An ebook copy of Wrangling the Cowboy’s Heart & 3 Tule ebooks of your choice

To enter Giveaway: Please complete the Rafflecopter form and Post a comment to this Q: What did you do as a child or young person that you wish you could have done for a living?

Excerpt from Wrangling the Cowboy’s Heart:

The moment Amanda Rodrigues placed her hand over his heart to break up a fight, rancher Liam Neisson knew he was in trouble. He may have watched Amanda grow up next door and run in and out of his house indulging in wild escapades with his sister, but at this year’s rodeo, he suddenly can no longer think of her as the dark-haired little orphan girl running wild. She’s now a stubborn brown-eyed beauty who needs his help.

Sure she’s crushed on Liam all her life, but can she trust him? Barrel racer Amanda recently inherited her parents’ small dream ranch years ago, and has learned to run it with little help, but when a letter arrives from an attorney saying his client has a promissory note now due, Amanda knows even her will and hard work ethic won’t be enough. Liam’s family offers to help, but his offer to buy her prized stallion raises her suspicions. What if Amanda is risking more than her heart?

Having never met an unhappy ending she couldn’t mentally “fix,” Leah Vale believes writing romance novels is the perfect job for her. A Pacific Northwest native with a B.A. in Communications from the University of Washington, she lives in Central Oregon, with a huge golden retriever who thinks he’s a lap dog. While having the chance to share her “happy endings from scratch” is a dream come true, dinner generally has to come premade from the store.
Website | Facebook | Twitter | Instagram | GoodReads |