All In by Raine Miller is the second book in the Blackstone Affair by Raine Miller. As always, you don’t HAVE to have read Book 1 (Naked) but things will make more sense and you’ll enjoy this book more if you have read it.

We continue on with the story of Ethan Blackstone and Brynne Bennett. This time, though, the story is from Ethan’s POV! I know, so unique, right? I can’t tell you how many books I’ve read from the hero’s POV but it hasn’t been many. And Raine Miller does it pretty well!! 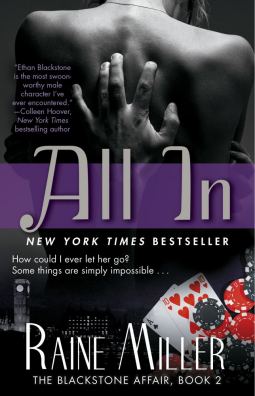 There were several things about this book that I really liked. I liked that Ethan addresses how quickly he’s fallen for Brynne. When reading Book 1, I was thinking that he fell for her awfully fast and I felt like we never really found out why. Here, Ethan mentions it, and no, he still doesn’t have an explanation for it but I don’t think we really need one. He truly does love her and its no game so it doesn’t matter. It’s just fun to go on this journey with him. One of the things that REALLY had me falling for Ethan was when he commented on how sexy Brynne was while she was making dinner one day. I mean, cooking dinner is something you do everyday (for the most part) and for your lover/spouse/significant other to find that sexy is just awesome!

Then, we also see that Ethan is really sentimental. But it doesn’t make him less of a man, which is a relief. He’s still big, strong Ethan Blackstone but he can also say I Love You and I Need You and all of those sweet nothings that we long to hear. Plus, he says all that FIRST! I mean, hello!? I will admit that it starts to get a teensy bit on my nerves when he’s kind of second guessing himself or when he’s not feeling confident about their relationship but its only for a short while.

The downside to Ethan’s POV is that we very little insight as to how Brynne is handling all of this, like Ethan’s love for her, her true feelings for him, how she feels about the continued threat against her, all of it. But I don’t mind it TOO much. Ethan’s insight is unusual that it carries right over any kind of concerns that I have about anything else. Besides, it was a lot of fun to see what Ethan does all day and how he’s handling her protection.

Towards the end, Brynne starts feeling tired and sick. Now any of you who have read romance novels before will come to the same conclusion that I did with what may be wrong with her. But, don’t make your bets just yet! The author may surprise us in Book 3!

This one may have a little less of the mystery about who is harassing Brynne and more of the love story between Ethan and Brynne. I know that I didn’t mind it so much. It was just so great to see inside Ethan’s head during this really interesting time in their new relationship. I would really recommend this one to anyone who has read Book 1, even though it is NOT required. I’d also recommend it to anyone who wanted to read a book, written by a woman, from a man’s POV. It was a lot of fun and really sweet!

Ethan Blackstone has a problem on his hands. He’s broken Brynne’s trust and she’s left him. He’s unwilling to live without her and isn’t giving up—he’s dead-set on getting his beautiful American girl back. The passion between them was explosive, but the secrets they hid from each other are dark and chilling and are powerful enough to destroy their shot at a life together. With political threats now directed at Brynne, Ethan is running out of time and will need to gather all his strength and agility to protect her from the dangers that could take her away from him forever. Will Ethan be able to save Brynne from a past that keeps her locked in fear? Will he ever feel the warmth of her touch, the solidity of her trust again? This is a lovestruck man who is willing to do whatever it takes to possess the heart of the woman he loves. He’ll go to any lengths to protect her. He’ll go all in. Here is the fiery story of what happens when two people surrender to a love so great it can heal the scars of the past and give way to a life of pure, rapturous ecstasy.

One Response to “REVIEW: All In by Raine Miller”