In Claimed by the Warrior by Joss Wood, Jed Hamilton has finally returned home, after 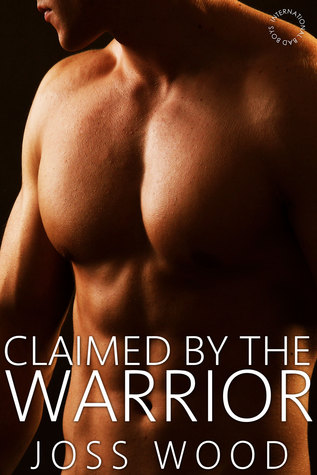 nearly a year working around the world, as both a photographer and a recovery agent. When his sister asks him to meet her at a bridal salon, he shouldn’t be surprised by the news that she’s engaged. Yet he is. And what is more surprising, is the fact that she wants him to be her maid of honor (or more like man of honor), knowing how he feels about love and marriage.

Being attracted to bad boys has always been a problem for McKenna Dixon. Yet, the moment Jed walks into her bridal salon, she’s reconsidering her choice of giving up on that type of man. He calls to something within her, and when her life is threatened, she grudgingly accepts his help in keeping both her, and her daughter safe.

From start to end, this book was engaging, exciting, and a pleasure to read. The plot was fast-paced because of the suspense, and the dialogue had me laughing almost every time McKenna’s daughter, Daisy, spoke.

“My mommy wants to hit you with a bat. What did you do to make her mad?” Daisy said conversationally and McKenna groaned.
“Nothing yet but the night is still young.” Sexy butt didn’t turn around, didn’t take his eyes off her daughter. “Can I ask you something?”
Daisy’s brilliant blue eyes flashed with excitement. “Sure.”
McKenna felt like an idiot just standing there, holding the bat up, not sure whether to swing or not. Neither the man nor Daisy seemed worried that she actually would take a swing at his head. Huh.
He lowered his voice. “Is she still checking me out?”

Both Jed and McKenna are great characters, and Jed’s back story is fascinating. His two jobs totally conflict – one requires anonymity, while the other gains him recognition. How he’s managed both for as long as he has without any problems, was a tribute to the skills he’s learned throughout his life. While with McKenna, she’s strong and brave. She’s faced some tough challenges with the various men she’s been with. They’ve disappointed her, and yet she’s managed to bounce back every time to the strong, and independent woman she is.

The sex scenes are completely passionate, and filled with so much heat that’s driven by their playful banter throughout the story. Their reactions, as well as their words definitely make for some strong chemistry, and Jed’s statement below is so true.

McKenna considered challenging him to a staring competition but knew that she didn’t have a hope of winning so she shrugged. “Why do you want to know?”
“Because we could start a wildfire from the sparks bouncing between us.” Jed prosaically replied. “So, what is it?”
“I am a single mother and planning to stay that way.” She lifted her hand as a predatory expression crossed his face. That admission meant he was now the predator and she was the prey. Not a situation she felt comfortable with.

Overall, Claimed by the Warrior by Joss Wood was a good book that I will most likely read again, although the suspense part of it was a little predictable. I had a feeling the antagonist was going to be the person I suspected. Just by some of the words that person spoke. I would recommend it to readers that love a story where the hero falls in love with, not only the heroine, but her daughter just as much.

Bad boy Jed Hamilton is ex-special Forces and a current undercover recovery agent who’s mentally and physically tough, a lone wolf and, above all, violently allergic to commitment, permanence, and anything wedding related.

So when he learns, in the very sexy McKenna Dixon’s bridal salon, that his younger sister is getting married and wants him to be her “man of honor”, Jed wishes he was anywhere but in Cape Town. Especially now that he’ll be spending more time around the one woman who makes him consider perilous phrases like “what if” and “maybe”…

McKenna Dixon loves bad boys, but her past experience with the species has led to nothing but pain and heartbreak. Jed Hamilton is exactly the type of man she should avoid, but when a nasty incident threatens her and her daughter, Jed immediately appoints himself as their protector, even though it’s not a part of his job description.

McKenna is determined not to allow another bad boy to flip her life inside out, and Jed is determined to retain his bachelor status and to keep travelling and working. But, as they both discover, love does its best work when they are busy making other plans…

« REVIEW: The Bride Wore Red Boots by Lizbeth Selvig
REVIEW: Even Vampires Get the Blues by Sandra Hill »

10 Responses to “REVIEW: Claimed by the Warrior by Joss Wood”