In From This Moment On (The Sullivans #2) by Bella Andre, Eldest brother in the Sullivan clan, Marcus, is looking for a one night stand. His two year relationship just ended on a very bad note and he wants to shed his responsibilities and let loose just this one time in his life. But when the hottest girl to walk in the bar all night makes her way straight to him, he knows he’s in trouble. She is everything his ex was not: she’s petite but curvy in all the right places, she’s dressed to kill in a leather dress and skyhigh heels, and she looks like she’s ready for a wild time. They leave the club together riding the wave of their intense attraction, only for Nicola to fall asleep on his lap during the cab ride. He is so mesmerized by the beautiful 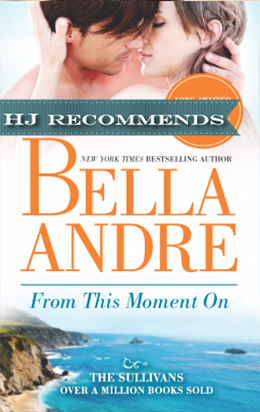 woman he met that he spends most of the night holding her, watching her sleep. When he uncharacteristically handles the morning after badly, he kicks himself and knows if he ever gets the chance to have a night with Nicola again, he will do anything to make it happen.

“Being with Nicola like this was as natural, as unstoppable, as the tides. There was no ebb and flow to his desire for her, only a constant crashing of need and want that kept dragging him deeper under her spell.”

His prayers are answered when his choreographer sister invites him to see her dance crew rehearse and Nicola is standing there looking as beautiful and sexy as she did in the club. Marcus now realizes why she had looked vaguely familiar when they met as she’s introduced to him as pop star Nico. They pretend they’ve never met before so he won’t have to explain it to his sister but they can’t stop looking at each other. They are unexpectedly thrown together after rehearsal and Marcus finally gets his chance to spend time alone with Nicola. Neither one of them expected how strong their reaction would be and how quickly they would feel drawn together. They both know this is meant to be a one time fling, but Marcus and Nicola can’t seem to tear themselves apart. One night turns into two and before he knows what’s happening, he doesn’t think he’ll be able to say goodbye to the woman of his dreams.

“The kiss–their first kiss–was beyond anything she’d ever experienced. Every ounce of his desire, every ounce of his frustrated need, everything she now realized that he was denying himself by letting her go, poured from his mouth to hers.”

Nicola “Nico” Harding was born to be a musician. She loves the creativity of songwriting and how great she feels after a performance. But there is a downside to fame as well. Not being able to trust people around you is one big lesson she learned the hard way with her ex Kenny. Tired of sitting in her hotel room alone on a Friday night, she decides to find a sexy guy to have a one time fling with, like the press loves to accuse her of frequently. They don’t realize how straight-laced she is compared to her image so she has to tell herself that she can handle a casual romance. She lays eyes on one of the most gorgeous men she’s ever seen when she walks into the club and decides to go straight to him before she loses her nerve. His apparent interest in her flashes in his eyes as he follows her out of the club into a waiting taxi. Her exhaustion from dance rehearsals catches up with her and her resolve starts to slip. Marcus proves himself trustworthy both in the taxi and at his brother’s house when he doesn’t take advantage of their situation.

The awkward morning after starts off well but takes a turn for the worse when Marcus denies her the chance to have their one time fling. Nicola is emotionally zapped even though they just met. She suffers through her rehearsals and works as hard as she possibly can to keep Marcus from her mind until her choreographer Lori introduces him to Nicola as her brother. Sparks immediately fly again and she gives in to the temptation. She wants to shield him from her crazy life full of paparazzi and tabloid rumors but he doesn’t seem the least bit concerned. They both know their lifestyles don’t match up with her traveling constantly so she tries to distance herself from him and build a protective wall around her heart. Only the damage has already been done. Nicola is head over heels in love with her dominant man and has to find some way to let Marcus go.

This is another incredible story by Bella Andre. If I hadn’t already fallen in love with the Sullivan family in The Look of Love (The Sullivans #1), this book would have cinched the deal. Marcus is a true alpha male to me: he’s physically and mentally strong but would never harm his loved ones, he’s loyal, he fiercely protects those close to him, and he’s a take charge male in the bedroom. So when Marcus is paired with the creative and curvaceous Nicola…things get heated and intense. Quickly. I’m happy that Marcus and Nicola get their happily ever after. They’ve given so much to others in their life that it’s only fair they get some happiness too. Highly recommended!

Expanded Edition! More Story! More Sullivans!
Fans of Bella Andre’s Sullivan Series will love this long-awaited print edition of FROM THIS MOMENT ON. It features a longer, more-detailed story with all the emotion and sensuality that readers love. Not to be missed!

Marcus Sullivan has always been the responsible older brother, stepping in to take care of his seven siblings when their father died. But when the perfectly ordered future he’s planned turns out to be a lie, Marcus needs one reckless night to shake free from it all.

Known throughout the world by only one name—Nico—pop songstress Nicola Harding is seen as the ultimate sex kitten. But it’s all a lie. After a terrible betrayal she refuses to let anyone else close enough to find out who she really is…or to hurt her again. Especially the gorgeous stranger at the bar.

One night is all Nicola and Marcus agree to share with each other. But instead, a deeper connection than either of them could have anticipated begins….

« REVIEW: Inked Ever After by Elle Aycart
REVIEW: Sweet Tea and Secrets by Nancy Naigle »

2 Responses to “REVIEW: From This Moment On by Bella Andre”