Hot for a Cowboy by Kim Redford is the fourth book in the author’s Smokin’ Hot Cowboy series. This book’s 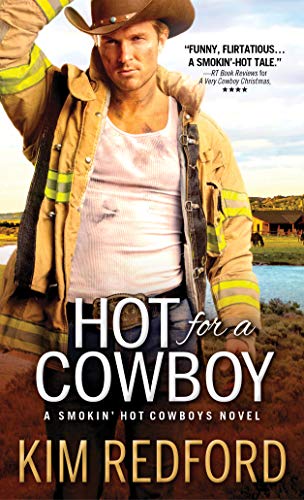 storyline is a very interesting one with some surprises.

Eden Rafferty has just returned to Wildcat Bluff in a sorry state. Her career in Los Angeles is lost thanks to her lowdown, snake-in-the-grass, lying, cheating ex-husband and on top of destroying her career the slimeball has taken almost everything she owned in the divorce. Ranch radio station KWCD in the Wildcat Den which was left to her by her Uncle Clem is all she has left. It’s where she got her start in broadcasting with DJ Wildcat Jack. Now it’s where she intends to start over.

One day after returning back to her roots Eden is in town to pick up a few things. After leaving Easy In and Out she returns to her car in the convenience store’s parking lot to find her ancient Volkswagon Beetle, named Betty by her Uncle Clem for Betty Grable, World War II pinup girl, hemmed in by a six-wheeled dually and a jacked-up pickup. She has no time for this as she has to get back to Wildcat Jack and the radio station. Fortunately a cowboy sees her predicament and steps up to help by lifting Betty and moving the car enough so Eden can get in. When Eden sees who her knight-in-shining-armor rescuer is she is struck by a passionate memory. The cowboy rescuer is none other than Shane Taggart, the cowboy who was her “first” back on prom night just before she left town to pursue her broadcast career. Both Eden and Shane feel that same chemistry at this unexpected reunion. Where do they go from here?

Hot for a Cowboy by Kim Redford is the fouth book in the author’s Smokin’ Hot Cowboy series. This book’s storyline is a very interesting one with some surprises. The chemistry between the two main characters was fun to witness. Their struggles for a HEA is a test of true feelings and overcoming some loss of self-confidence on Eden’s part. The firefighter cowboys and cowgirls of Wildcat Bluff are a truely dedicated and romantic bunch.

Eden Rafferty has lost it all: big time career, high-profile marriage, and just about everything she owns. Coming back to Wildcat Bluff with her tail between her legs, the only person who can help her heal is cowboy firefighter Shane Taggart. But nothing is simple, and their high-octane past is just the beginning of their current problems…

2 Responses to “REVIEW: Hot for a Cowboy by Kim Redford”