The wonderful suspense filled book Killing Me Softly by Leisl Leighton kept me on the edge of my seat until the very end. The story line was wonderful, the romance was hot and the book really kept you guessing. Let me tell you a little about this wonderful book. 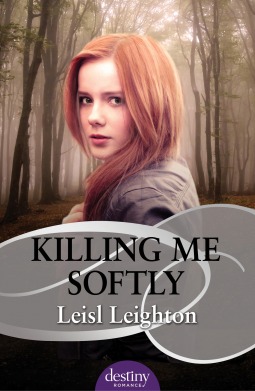 Alexia Deningham, reclusive record producer, likes her privacy and is never seen in public. An incident eleven years ago has caused her to change her identity to protect herself and her catatonic twin sister. When she is asked by her best friend Billy to allow he brothers band come and work with her, she agrees only on the condition that they come to her home and that they tell no one that are working with her.

Superstar Daemon Flagherty, lead singer of the band The Sidhe, has been wanted to work with Alexia for years, and now that she has agreed to work with his band, he has some reservations. After is ex-wife has laid all his dirty laundry out for all the world to see, he is afraid that whatever she is hiding about her past could harm the band and their ability to create great music together.

As they begin working together they both feel an attraction that is hard to deny. As they embark on a journey of discovery together, little do they know that a secret stalker from the past is about to come back to finish what was started eleven years ago. Will they survive, or will they lose each other forever?

I loved this book and really connected with the characters. Daemon and Alexia both had trust issues and had so much to over come in order to get to a place where they were comfortable enough to admit that they had feelings for each other. It was only through the music that they loved that they were able to see past the scars and the protective outer shell and see the real person inside.

“They were two people who’d been taught by the circumstances of their pasts not to trust, not to open up to others, but through their passion for music, they had shared more then they’d meant to, more then they been aware of.”

Daemon what hurt by a drug addicted mother who told his for years that he was unlovable, beaten and abused by her addicted boyfriends and forced to help her steal, cheat and scam just to survive. Alexia blames herself for the attack of her twin sister by a man who was obsessed with her. Blames herself for the catatonic state that she has been in for the last eleven years. Believing that it should have been her, not her sister Cat, who was kidnapped, attacked, and terrorized. They both make mistakes as they try to come to terms with their feelings for one another. It is not until they are able to love and forgive themselves that they are able to realized that they deserved to be loved, to be happy.

This is a story about hope, survival, and finding that once in a lifetime type of live. The other characters in this story made it that much better. If you are looking for a great romantic suspense, look no further than Killing Me Softly. I look forward to more stories by this author.

Destiny Romance Publication Date: June 10, 2013
Reclusive record producer, Alexia Deningham, guards her privacy fiercely. When she agrees to work with superstar Daemon Flagherty, and his band, it is only on the condition that they stay with her at her isolated country estate.Fresh from a messy divorce, Daemon is determined to focus on his music. He wants to work with the best and that means Lexi. He certainly isn’t looking for romance, but he finds himself intrigued by Lexi’s secretive behavior.

Despite Lexi’s reservations, their attraction grows. But someone is watching Lexi. Someone who will stop at nothing to destroy the woman who has ruined his life. When his campaign of terror ratchets out of control, Lexi must fight for survival but who can she really trust?

« REVIEW: The Rancher’s Homecoming by Cathy McDavid
REVIEW: Lead Me On by Crystal Green »
Comments are closed.