Love Not at First Sight by Sarah Ready: Veronica Diaz wants absolutely nothing to do with men, relationships 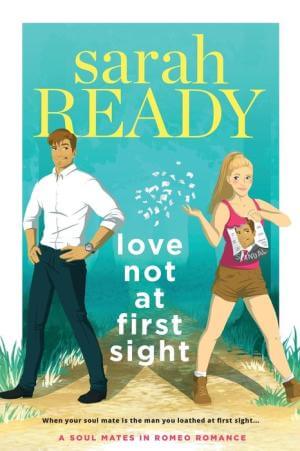 and all the heart break that comes with them! After seeing her mother being destroyed by ‘love’ Veronica is determined to spare herself that kind of pain much less willingly go looking for it. This is exactly why she is determined to avoid Miss Erma at all costs, you see Erma is a well known soul mate seer, and it would seem that she has seen Veronica’s perfect match and he is the king of all players; Frederick Knight. Determined to avoid meeting Frederick at all costs Veronica decades to head to the wilderness until the millionaire playboy leaves town, the last thing she expected was to unknowingly run right into her soul mate.

Sam is tired of living up to the image of rich playboy that has nothing more than money to offer any woman, which is what leads him to the small town of Romeo and to get a bit of rest and restart his life. The last thing Sam expected was for a simple walk in the forest to change his life completely! But what happens when Veronica realizes that Frederick Knight and Sam are one in the same guy?

Okay, so this definitely did not go the way I had expected! I was expecting cute small town romance, definitely not all the drama that was packed in this book. Gosh did Ready pack in a whole lot in a short read, all of which had me constantly questioning what will happen next!

I loved how real and relatable both Veronica and Sam were, which made reading their story all the more enjoyable. However it was the entire being trapped underground and fighting to survive bit that truly made this book a worthy read. I loved that this was such a fresh take on a romance, and it gave the entire book a whole other dimension. The only part I found unrealistic was how fast Veronica and Sam moved with getting it on, yes the steam factor was there but not completely realistic in my opinion.

Love Not At First Sight is definitely an interesting read that will have you rooting for Veronica and Sam to find their way to safely and realizing that everything we see isn’t always what it really is!

When your soul mate is the man you loathed at first sight…Book Two in Sarah Ready’s Soul Mates in Romeo series sparkles with tension and a delicious helping of swoon-worthy romance.

Veronica Diaz loves her career, her friends and the great outdoors – she has no room in her life for men. In fact, she knows there are only two types of men in the world: players and wanna-be players and she wants nothing to do with any of them.

So when a psychic informs Veronica that her fated soul mate is Frederick Knight “The King of Players,” Veronica does what any sensible woman would do – she runs.

A twist of fate lands Veronica in the depths of a pitch-black cave system with a man she’s never met and can’t see. As Veronica and Sam struggle to survive they open up, share their secrets, and risk their lives for each other. Soon Veronica starts to wonder if maybe not all men are players, and maybe she can trust Sam enough to fall in love.

The only problem: Sam is actually Frederick Knight. The man Veronica swore she’d never, ever, ever love.

In fact, she loathed him at first sight.

And if they make it out of the cave alive, and Veronica sees him for the first time, she’ll loathe him again. Won’t she?

But maybe, sometimes you can only see who someone really is when you can’t see them at all? And maybe you can only fall in love when it’s not at first sight?

« REVIEW: The Princess and the Pediatrician by Annie O’Neil
REVIEW: The Spark by Vi Keeland »
Comments are closed.