Murder on Prescott Mountain by Lena Diaz is the first book in her new Tennessee Cold Case series. This is a fantastic opening story for this series. 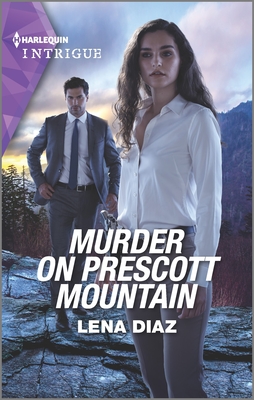 Willow McCray is a detective for the Gatlinburg Police Department. She has worked long and hard to reach that detective role. Her boss, Sgt. Jeffries, was not at all pleased that she was promoted over his nephew. Willow is determined to prove herself and become a competent detective. At this point in time the police department is trying to catch the River Road rapist. Willow volunteers, along with other female police officers, to try to draw out the suspect by walking along River Road dressed in provocative clothing. She has a team following her as backup. She notices two men following her into an alley. There’s a scuffle and one man runs off while Willow cuffs and arrests the other one, the one she suspects is working in tandem with her attacker. Turns out her collar is Grayson Prescott, former Special Forces soldier and very wealthy local businessman. He was trying to protect Willow from her attacker, not help the attacker. Oops! Willow apologizes to Grayson and their talk leads to an idea for a private cold case solving agency as the local police forces don’t have the budget or manpower to put a lot of time and energy into solving cold cases. Grayson has a reason to greatly appreciate Willow’s idea.

Grayson Prescott has been hounding the Gatlinburg Police Department for seven years to solve the case of his wife’s murder and the disappearance of his three-month-old daughter. Supposedly the police are getting nowhere with the case but Grayson thinks they really aren’t trying very hard. With this background it’s no surprise that Grayson would try to help the woman he sees about to be attacked. Being arrested by Detective Willow McCray for trying to do a good deed doesn’t sit well with Grayson. When he realizes Willow’s boss has sort of set her up, hopefully as a learning tactic, Grayson agrees to accept Willow’s apology and then is very impressed with her idea for a private cold case solving agency. Working together, since Grayson convinces Willow to leave the Gatlinburg PD and come work for this new agency, revs up their attraction to each other.

I could not put this book down. The tension was handled expertly. There’s plenty of action and suspense. The characters are very likable. I really liked how this author set up the conflict and then engineered the resolution. I am really looking forward to the next book in this series, Serial Slayer Cold Case, scheduled to be released March 2022.

Could the mystery that’s haunted him for years

Be the break her latest case needs?

Former soldier Grayson Prescott started his cold case firm to bring murderers to justice. Specifically the one who destroyed his life. When his obsession intersects with Detective Willow McCray’s serial killer investigation, they join forces. But Willow falls hard for the haunted investigator—even as danger mounts. Stopping the River Road rapist will save the victims…but will it save their future together?

Discover more action-packed stories in the A Tennessee Cold Case Story series. All books are stand-alone with uplifting endings but were published in the following order:

One Response to “REVIEW: Murder on Prescott Mountain by Lena Diaz”