Only on His Terms by Elizabeth Bevarly: Sometimes people aren’t what they seem. 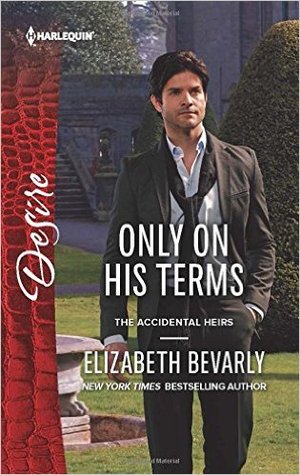 Sometimes the ones you expect the least from give you the biggest benefits.

Gracie Sumner was the typical girl next door. She can from a long line of strong women and knew she could take care of herself. So when she lost her mother and then her neighbor, whom she had thought of as a grandfather, it was okay for her to leave and begin again. Since there were other factors involved this was a very good thing.
Harrison Sage III couldn’t understand why his father left him and his mother, or his billion-dollar company. All Harrison knew was that his father did leave and now was dead. He couldn’t figure out why his dad had left everything to this nobody gold digger, he was smarter than that, right?

When Gracie and Harrison meet it turns out that they knew two different versions of Harry. Will Harrison realize that those who do not learn from the past are doomed to repeat it? Or will the past and not digging deep enough come back to haunt all three of them?

Wow. Ms. Bevarly has given her readers an excellent start to a new series. She takes her readers through the transformation of Harrison in great detail without being overwhelming. The story really focuses on him and therefore we get to see a lot through his perspective. There really isn’t a lot of heat, but what there is of it is tastefully done. The plot is swiftly moving and rarely stalls. This is a good Beast transformation story that will leave you with a happy heart.

Harrison is not amused, especially when the quirky gold digger gets under his skin. How can the sophisticated New Yorker let himself be attracted to the woman who stole his father’s fortune? Soon a contested will turns into a contest of wills — one whose outcome could very well be determined in the bedroom!

4 Responses to “REVIEW: Only on His Terms by Elizabeth Bevarly”