The Things She Says by Kat Cantrell: VJ is working her way to saving enough money to leave her small town in Texas and head to the big city of Dallas. It can’t come soon enough for her! When she finds movie producer Kristian Demetrious lost in the middle of no where, Texas, even not knowing immediately who he is, she is smitten with him! He is just passing through on his way to Dallas, with an agenda of his own once he gets there…even if he is intrigued by the beautiful VJ. 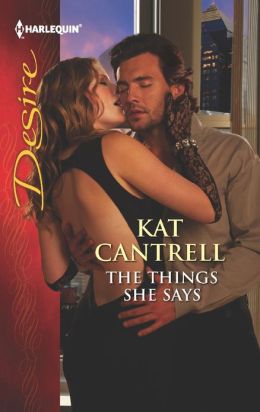 Things take a turn for the worse for VJ when her father in a drunken rage tells her he’s taken her money, then is physically abusive to her. She decides then and there that she’s not waiting any longer, she packs her bag and leaves. The only problem is she has very little money left, and no way to get to Dallas. Unless she can convince Kris to let her hitch a ride with him…
Despite himself, Kris is fascinated by VJ at the same time wanting to protect her. He becomes her knight in shining armour when he lets her ride along with him on the way to Dallas. VJ definitely has stars in her eyes where Kris is concerned. But she can also see past the walls he’s so carefully erected, and the emotions he so carefully hides. He is determined there is no such thing as love, Kris discovers and she sets about to convince him otherwise. Along the way to Dallas, VJ gives Kris ‘romance instructions’…all the while hoping he’ll open himself up to her. VJ sees past his fake engagement to a movie star and calls him on behaviors when others wouldn’t dare!!

As strong as the pull is towards VJ, Kris is determined that nothing can happen with them, he will be on his way back to LA soon anyway! When he finds out VJ actually has no money and no where to go, he is suddenly offering to let her stay in his hotel suite. In her own bed of course! In that close contact, there is no way they – especially Kris – can deny the heat between them. Only for VJ it’s more than lustful heat…it’s becoming much more meaningful, even after only a few days, and she is determined to break through Kris’s walls.

But can she do that? Even if she can, there is so much at stake with the film Kris is desperate to produce…can he have them both or will he have to chose one? After they’ve both given in to temptation what can become of them if anything when they both come from such different worlds?

Kat gives us much more than the romance in The Things She Says. Kris has a lot of issues left over from childhood that he’s never dealt with, he’s just locked them away, determined there can be no such things as true love or a happily ever after. We see Kris struggling a lot with this as well as the vision he has for his next film and how to make it a reality. VJ is an interesting girl! On one hand I’m thinking, really? Who leaves town with no more than $26 to her name, no way out, no real plan? Things were not good in her home ever since her mother died 2 years ago, but she did have friends and other family in town she could have turned to for help. As I got more into The Things She Says, I liked VJ more and more…she was much more intelligent and insightful than she first appeared. I did love how she didn’t stay in a bad situation and I also liked how she saw right through Kris, kept pushing him to open himself up and recognize his emotions. She is also very able to stand up for herself! I also loved that even after her experiences she believed in true love.

There were some secondary characters in The Things She Says, but they were for the most part on the outskirts of the main story line, even the star for Kris’s film. This worked out well though, the story didn’t need a lot of other people around to be told.

When I first started reading The Things She Says I was a bit put off by VJ being so naive (I thought at the time!) but it quickly turned into a well written, funny at times romance about a young lady who believes in the happy ever after, love at first sight and the man who doesn’t. There is great heat between the pages too, well written into the story. And you can’t give into temptation without some heat!!

Her Knight in a Shining Yellow FerrariOne wrong turn on a Texas highway and heartthrob director Kristian Demetrious is breaking his first rule: don’t get involved. Beautiful, sassy VJ Lewis needs his help—and a ride to Dallas. Kris wants to give her both….

Yet his career depends on arriving without giving in to the passion VJ ignites in him. And denying temptation gets harder with every mile. VJ insists the heart of a hero beats beneath Kris’s suave exterior—and she intends to prove it, one hands-on lesson at a time.

Suddenly this road trip is taking a whole new direction….

One Response to “Review: The Things She Says by Kat Cantrell”