In The Way We Weren’t by Phoebe Fox, Marcie Malone has never really been someone to act on a whim 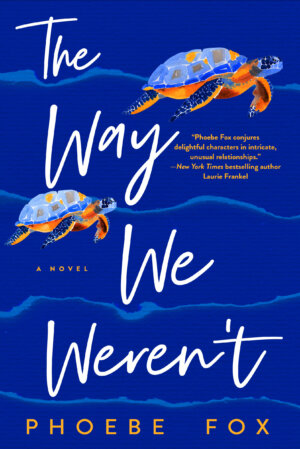 or to let her emotions guide her. Married to her high school sweetheart Will for twenty-five years, a recent devastating loss in their lives has her despondent and not acting like herself. Particularly when Marcie drives past the Atlanta exit to her job one morning and just keeps on driving until she hits the Gulf Coast in Florida. She has no idea where she is when she wakes up. Evidently some elderly man found her where she collapsed on the beach and brought her into his house for safety. Not wanting to go home and face her husband and their swirling emotions, Marcie accepts Flint’s offer to stay for a short while.

‘Had Marcie been bending herself too far to fit herself into someone else’s mold? Was she the only one who bent? Maybe she was through compromising.’

Flint wasn’t sure what caused the forty-something-year-old woman to end up on his beach but he couldn’t watch anything bad happen to her. Even if company in his little home is the last thing he wants. Holed up after what seems like a lifetime of letting down the ones he loves, Flint doesn’t have much in the way of hospitality or empathy to give Marcie. Or so he thought. Because somehow the young woman worms her way into his daily life–and eventually even into his heart. He might not be ready to face down his past transgressions and make them right, but with Marcie regaining her spunk and prompting him to do better, Flint can honestly say he feels a bit of hope for the future for the first time in a long time.

‘One irritating thing about having someone else around was that you were forced to see yourself reflected in another person’s perception of you.’

The Way We Weren’t was an unexpectedly touching novel about running away from your past, getting stuck in a rut emotionally, and finally finding the courage to pave your way forward–with a little help from newfound friends.

‘When your life was reduced to broken pieces, apparently the tiniest part of it that survived intact was cause for rejoicing.’

I wasn’t expecting to get swept away with Flint and Marcie’s story. Especially after it took me a little while to get a feel for where the characters were in their lives, what they were really running from, and how they could possibly add value to each other’s situation. But as Phoebe Fox wove their stories together–even adding a few parallels in their struggles–it all made sense. And as much as it was devastatingly heartbreaking to watch Marcie and Flint at such low points, it was equally heartwarming to watch the fierce bond that grew between them.

The majority of the book is set on the Gulf Coast of Florida. And I just have to mention that the pretty book cover depicts one of the more touching aspects of the story–for me at least. The sea turtles were one way that Flint and Marcie worked together, to save them from natural predators and even a huge storm. What happened at the end in that regard was utter magic. (I don’t want to give spoilers!) Something that I think readers will smile over, for sure.

I won’t delve into Marcie or Flint’s backstories or specifically what they were dealing with as learning about it a small chunk at a time was part of the experience. I can say that it was pretty fun at times to watch grumpy Flint grumbling at Marcie. A woman who had plenty of experience with difficult people, given her career in hotel hospitality. She started off not really caring what Flint thought. But as Marcie got out from under her grief, she began giving him just the right amount of attitude to make him not only like her more, but to bring him out of his decades-long funk. They were a duo of two lost souls who shouldn’t have worked. But Flint and Marcie made a formidable team when they set their minds to it. And their HFN ending left some room for interpretation, but it was in a promising finale given the trauma from which they were healing.

QOTD: Have you read any books with main characters who eventually bond that are from two different generations? (Sarah Morgan’s Summer Seekers was another wonderful example of this, imho).

An unlikely friendship between a septuagenarian and a younger woman becomes a story of broken trust, lost love, and the unexpected blooming of hope against the longest odds.

You trying to kill yourself, or are you just stupid?

Marcie Malone didn’t think she was either, but when she drives from Georgia to the southwestern shore of Florida without a plan and wakes up in a stranger’s home, she doesn’t seem to know anymore. Despondent and heartbroken over an unexpected loss and the man she thought she could count on, Marcie leaves him behind, along with her job and her whole life, and finds she has nowhere to go.

Herman Flint has seen just about everything in his seventy years living in a fading, blue-collar Florida town, but the body collapsed on the beach outside his window is something new. The woman is clearly in some kind of trouble and Flint wants no part of it–he’s learned to live on his own just fine, without the hassle of worrying about others. But against his better judgment he takes Marcie in and lets her stay until she’s on her feet on the condition she keeps out of his way.

As the unlikely pair slowly copes with the damages life has wrought, Marcie and Flint have to decide whether to face up to the past they’re each running from, and find a way to move forward with the people they care about most.