What She Saw by Barb Han  is the sixth book in her Rushing Creek Crime Spree series. The mystery is 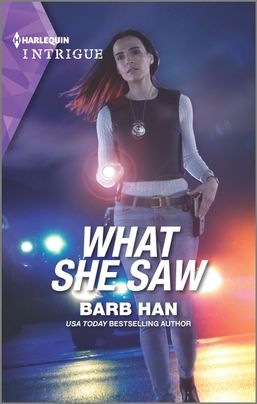 solved! You’ll never guess who the Jacobstown Hacker is until the end.

It was a glorious week! That fling with Jordan Kent! They’d used protection every time. Deputy Courtney Foster is shocked to discover she is pregnant. So much to deal with. She took the job as sheriff’s deputy back home in Jacobstown after being shot while on duty. It was supposed to be an easy assignment but the protest turned violent and deadly. Eight Dallas police officers were shot and killed. She was the only survivor. She decided after her recovery from her wound that she wanted to work in a quieter environment. Thus taking the deputy position in Jacobstown.

Unfortunately Jacobstown has a probable serial killer on the loose. The Jacobstown Butcher started out cutting off the left foot of small animals and moved up to cattle and now a young woman named Breanna Griswold. This escalation is not a good thing. Then there’s the fact Jordan Kent is back at the Kent Ranch. He knows about the baby and has become overprotective. In some ways that’s a good thing because there’s some real nasty stuff barreling towards them.

Jordan Kent is the last single Kent sibling. He left Jacobstown years ago to oversee the family ranch in Idaho, only returning to Jacobstown for holidays and special family events. He is back now to help his family solve the strange incidents on the ranch which, so far, culminated in the murder of a young woman. The Jacobstown Hacker seems to be obsessed with the Kent Ranch for some reason. The week Jordan spent with Courtney was eye-opening. Perhaps she is another draw back home. When he finds out Courtney is pregnant with his child he is determined to be there for their child. They can do co-parenting in a friendly manner. Unless their attraction to each other leads to something more.

This is another thrilling yet emotional story. Courtney and Jordan learn to let the past go and how important love and family can be. This book is quite a page-turner with plenty of action. I am happy to finally find out who the Jacobstown Hacker is. Great end to this mystery. I recommend this series for Romantic Suspense readers.

She’s in a murderer’s sights…

But it’s not just her life in danger.

Deputy Courtney Foster’s brief fling with Texas ranch owner Jordan Kent was her time-out after getting shot in the line of duty. Only now she’s hunting a killer…and she’s just discovered she’s pregnant. Jordan will put everything on the line to work with Courtney and capture whoever has suddenly turned his sights on the mother-to-be. Before long, they’re in a race against the clock to stop a murderer from obliterating all their futures.