Wife Support System by Kathleen Whyman: Initially, the idea that a return to the ‘village’ being the best place to raise a 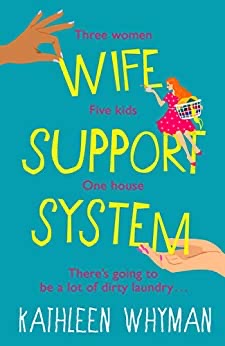 child was an attractive one, however, in reality putting three very different women together, who aren’t really ‘friends’ is a recipe for disaster, particularly when their home lives and backstories aren’t shared cleanly from the beginning. When Erica’s live-in Nanny quits at the last minute, Erica is left with having to juggle a demanding job as a TV stylist and take care of her 8 year old daughter Jasmine simultaneously. Dan, Erica’s partner, is pretty much a free-lance father, who has absolutely no interest in sharing the responsibility of raising Jasmine as it interferes too heavily in his work and leisure time. Whilst on holiday with Louise and Polly, Erica comes up with the brilliant idea of all moving into Polly’s dilapidated Bnb so that they can support each other and share the load of their combined 5 children.

Originally, Polly and Louise are dead-set against the idea, however, Louise’s husband Nick, who by all accounts is loving, decent, supportive and hot, is fed up with the ridiculous OCD antics of his patronizing wife and the lack of raunchy good times happening. Louise, devastated by Nick’s request to have some time and space, reluctantly agrees, and Polly, feeling somewhat more balanced and less inclined to have horrific panic attacks with the women and children around, agrees that it too could be the change she needs to get herself better again. And so the three women and five children set about making the best out of the situation.

Apart from Nick, Rob and Alex who sit on the periphery, the central female characters are by and large unlikeable. Erica, literally neglects Jasmine and despite my deep loathing for Dan and men like Dan, Erica was in many ways just as bad in terms of her serious self-interest. How the gorgeous, attentive Rob could fall in love with her and continue to soothe her quite legitimate mother guilt is bizarre. And despite the ludicrous OCD rosters that Louise constructs to exert control over the household, Polly inevitably sucks up the majority of the mothering as both Louise and Erica continuously both flake out. And no one thanks her.

In many ways, this was in fact a pretty effective statement on mothering and motherhood, and whilst Polly may have crossed some boundaries form time to time, it was actually difficult to even blame her given the other two women were super content to let her do all the work. Strangely enough, keeping Polly’s backstory to the closing few chapters was actually a critical error. It should have been laid out from the very beginning, not necessarily to Erica and Louise but certainly to the audience as the big reveal was layered in a strange conservative moral imperative that made very little sense – and for Erica to compare her own losses to Polly’s – I nearly died of eye rolling exertion.

All in all, despite the unlikable characters, Wife Support System was well written, easy to navigate and enjoyable despite the aforementioned frustrations. And if you are thinking, this type of village could be exactly what you need to help you maintain your career and role as a mother, ensure you have done a thorough background check on the people you are moving in with otherwise some crazy surprises might be in stall.

We’ve got the balance all wrong. Instead of living with our partners, struggling to do everything by ourselves and only seeing each other now and then, we should do it the other way round. We should live together and see them now and then.

Erica knows her suggestion sounds extreme, but when her nanny leaves without notice, she’s extremely desperate. Polly and Louise aren’t convinced, but when circumstances force them to move into Polly’s enormous but run-down house, they have to admit that life’s much easier when the childcare and workload is shared.

At first, communal living seems like the answer to all their prayers – childcare on tap, rotas for cleaning, and someone always available to cook dinner (no more last-minute pizza delivery!). But over time, resentment starts to grow as they judge each other’s parenting styles and bicker over cleaning, cooking and whose turn it is to buy toilet rolls.

And as one woman has her head turned by a handsome colleague, one resorts to spying on her husband and another fights to keep a dark secret, they need each other more than ever. But can Polly, Louise and Erica keep their friendship and relationships strong? Or will their perfect mumtopia fall apart?

One Response to “REVIEW: Wife Support System by Kathleen Whyman”