You Had Me at Hola by Alexis Daria: Soap opera darling Jasmine Lin is taking the daring step into 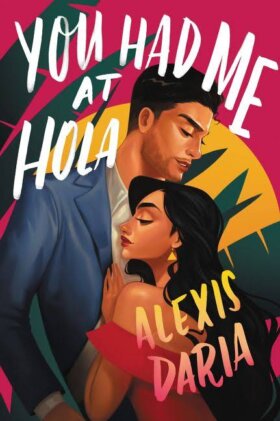 the world of telenovelas. After having her personal life blow up in the tabloids when her rocker boyfriend dumps her via the media also revealing that he cheated on her with someone that could practically be her twin, Jasmine is more determined than ever to put her leading lady plan in to motion. With the help of her two favorite cousins and the staring role in the new telenovela series Carmen In Charge, Jasmine is sure nothing will derail her, well that is until she has a crash meeting with her heartthrob Latino co-star Ashton Suárez.

“The man was an enigma, albeit a sexy one. If she were smart, she’d keep her distance. Too bad Jasmine had never been smart when it came to men.”

Ashton is having some what of a career crisis, fearing he might be aging out of the industry and having missed his chance of making it to Hollywood, Ashton sees this new role as his last chance. Already feeling nervous his first day does not get of to a very great start when he spills coffee all over his new co-star. Wanting to make things right with Jasmine but at the same time still wanting to maintain his distance Ashton finds him self in a tight spot, more so now that for the first time ever he actually wants to get close to someone and let them in.

“But as much as he wanted to kiss her right now, as himself, they were in a room full of their coworkers. And this was a line he’d sworn he wouldn’t cross ever again.”

Unable to deny his attraction to Jasmine, Ashton soon finds himself giving in to his desire to spend more time together, first under the guise of help Jasmine improve her Spanish. As they grow closer their chemistry transitions from on screen to off so much so that the steamy scenes are not so much acting anymore. However Jasmine finds her Leading Lady plan comes crashing down when she finds her self on the cover of the tabloids once again, only this time Ashton has his more protected secret exposed. The question that remains now is will Ashton be able to accept his truth being revealed and where will this leave his relationship with Jasmine.

“You Had Me At Hola” was a pure beauty! This novel paid homage to the Latinx community in the best way possible. I loved that there was so much Spanish included throughout the course of this read, what really stood out for me was that Jasmine could hardly speak Spanish but that did not hold her back from enjoying and living the vibrant culture.

“The closeness, the scent of his cologne wrapping around her like a comforting cloud, his hard body warm at her side. It was all so terribly . . . wonderful. She wanted to shift closer, to lean into him, to wrap herself in his warmth and the feel of his skin against hers.”

Jasmine was such a relatable character, all she wants is to love and be loved. And really who doesn’t want that in life. I loved that she had her support group with her two favorite cousins, the primas really added a nice touch of comedy to this novel. I liked that Jasmine recognized her own weakness and I think that’s what made her character my favorite female lead. Ashton on the other hand was not so much of an insta-love for me, it took a bit for me to warm up to him but once we got to see the real Ashton, I liked him. Ashton’s only major downfall was his insecurities and his need to keep people at arms length.

“Was it so much to ask for a loving, committed relationship with someone who unconditionally loved and accepted her for who she was?”

Overall this book is definitely a top contender in my top 10 of 2020 list. I think the whole concept of having a story in a story is what really won me over. I highly recommend picking up this novel, you will find yourself falling in love with the characters and their story.

RITA® Award Winning author Alexis Daria brings readers an unforgettable, hilarious rom-com set in the drama-filled world of telenovelas—perfect for fans of Jane the Virgin and The Kiss Quotient.

Leading Ladies do not end up on tabloid covers.

After a messy public breakup, soap opera darling Jasmine Lin Rodriguez finds her face splashed across the tabloids. When she returns to her hometown of New York City to film the starring role in a bilingual romantic comedy for the number one streaming service in the country, Jasmine figures her new “Leading Lady Plan” should be easy enough to follow—until a casting shake-up pairs her with telenovela hunk Ashton Suárez.

Leading Ladies don’t need a man to be happy.

After his last telenovela character was killed off, Ashton is worried his career is dead as well. Joining this new cast as a last-minute addition will give him the chance to show off his acting chops to American audiences and ping the radar of Hollywood casting agents. To make it work, he’ll need to generate smoking-hot on-screen chemistry with Jasmine. Easier said than done, especially when a disastrous first impression smothers the embers of whatever sexual heat they might have had.

Leading Ladies do not rebound with their new costars.

With their careers on the line, Jasmine and Ashton agree to rehearse in private. But rehearsal leads to kissing, and kissing leads to a behind-the-scenes romance worthy of a soap opera. While their on-screen performance improves, the media spotlight on Jasmine soon threatens to destroy her new image and expose Ashton’s most closely guarded secret.

2 Responses to “REVIEW: You Had Me at Hola by Alexis Daria”