Bonjour Chérie by Robin Thomas is a cute romance novella. It is about Beth Jenkins, who is in love with everything French. She dreams of going to Paris one day and has a big crush on her French 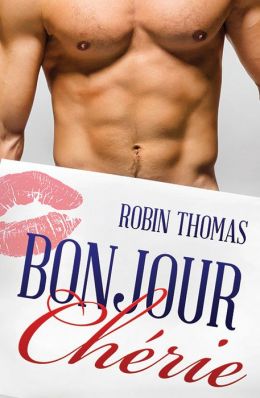 teacher André LeBlanc, who politely ignores her continous attempts to win him over. Things become intresting when Zach Mills enters her life when he joins her French class and now as she endeavours to catch André’s interest, she also stubbornly ignores the growing chemistry with Zach.

Now when her perfectly laid plans start to go haywire,will she able to understand what she really wants from life and whether Paris is always not the perfect destination.

The story is told from Beth’s viewpoint and the narration along with the writing is very good. Zach was a real sweetheart because of the way he was always willing to help Beth, even when she was really rude. I did not like Beth’s attitude throughout the story because I thought she was borderline rude every time with Zach and was vying for the attention for someone who did not pay her the attention she deserved.

Bonjour Chérie by Robin Thomas is a good, short and cute romance with loads of comedy of errors… I just wished that the main character would have appealed to me more.

Publisher: Escape Publishing – Harlequin Enterprises, Australia Pty Ltd (September 1, 2013)
It’s Paris or bust in this New Adult comedy of errors about seeing beyond the surface…Beth Jenkins is into all things French — especially her French teacher, André LeBlanc. She’s on the fast track to Paris and nothing will stop her, not even the very Australian Zach Mills, whose abs and attitude are a powerful combination. As she endeavours to catch André’s interest, she also stubbornly ignores the growing chemistry with Zach.But as mishap after mishap delays her dreams, Beth begins to learn that neither Zach nor André are quite what they seem. Will it be too late to win the one man who shows her that Paris is not the only destination worth planning for?