Love, Chai, and Other Four-Letter Words By Annika Sharma: The last thing Kiran wanted to 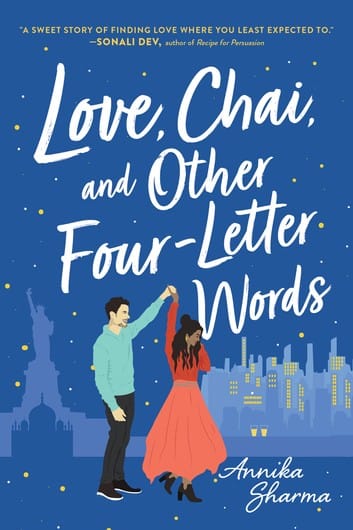 do was disappoint her parents after what happened with her sister but the heart wants what the heart wants and that could not be more true when it comes to her feelings for Nash. After moving from India to New York for college and then successfully transitioning into her job Kiran still can’t help but feel slightly lost in this big city, so when she sees her new neighbor locked out and looking as lost as she feels Kiran can’t help but invite him in. However Kiran definitely didn’t expect to connect so easily with Nash or for him to be the guy to help her knock of so many items on her bucket list!

Relationships, happily ever afters and stable commitment have never been something that Nash has experienced, with absentee parents and now seeing the very same cycle happening with the kids he works with Nash can’t help but resign himself to a relationship free life. Nash just never expected his new neighbor would ignite a spark he never even knew that he was capable of hoping for.

When I first read the synopsis of this book I was instantly intrigued, not only did Sharma promise a brilliant read but one that had proper Desi representation! As much as I tried to get invested and love this novel I just found a few to many hang ups, this however is not to say that Love, Chai And Other Four-Letter Words is not a book you should check out or that the other books in this series won’t be good.

Kiran was definitely an interesting character, on one hand I loved that she wanted to be better and bring pride and joy to her family but on the other hand I just felt that she let Nash kind of walk all over her culture. I will say that she was relatable in many ways and I absolutely adored her little girl group, the Chai Masala Club definitely has promise for a few more interesting books to come! I really enjoyed her inner monologs and the way she tried to face her problems and conflicts.

The biggest issue in this book had to be our hero, on the surface Nash was a nice enough guy but I just found it way to hard to believe that he had absolutely no knowledge of anything Indian. I mean come one who hasn’t heard off if not tried Indian food?! Not only did he come of as completely oblivious of any other culture than his own but he was way to preachy in the way he spoke to Kiran in regards to her parents.

Okay, the parents now this was another issue I had, I’m all about the pushy parents trope however I just felt that Sharma used an overplayed stereotypical image of Indian parents and that is genuinely not what the majority are like. Another thing that bugged me was the way that India was depicted, there was absolutely no need or reason to paint the place as this run down dump, personally I felt this could not be further from the truth.

Kiran needs to fall in line. Instead, she falls in love.

Kiran was the good daughter. When her sister disobeyed her family’s plan and brought them shame, she was there to pick up the pieces. She vowed she wouldn’t make the same mistakes. She’d be twice the daughter her parents needed, to make up for the one they lost.

Nash never had a family. The parents who were supposed to raise him were completely absent. Now as a psychologist, he sees the same pattern happening to the kids he works with. So he turns away from love and family. After all, abandonment is in his genes, isn’t it?

If she follows the rules, Kiran will marry an Indian man. If he follows his fears, Nash will wind up alone. But what if they follow their hearts?