One Little Secret (Dynasties: The Carey Center # 4) by Maureen Child is the last installment of the series and it couldn’t 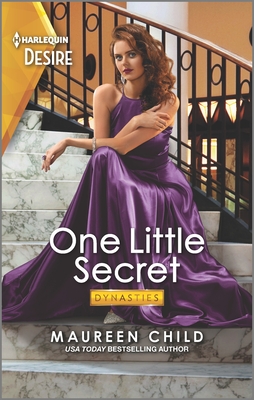 be better. Justin Carey is about to achieve the goals he had set in life, professionally speaking. To do this, he has teamed up with Sadie Harris, former owner of the luxury resort Justin has been remodeling, and his lover fifteen months ago. What Justin doesn’t know is that their brief affair had consequences…

It would seem that Justin is the black sheep of the family for not committing to the Carey business, but he’s not. Justin, like the rest of his siblings, has decided to leave his mark on the Carey legacy, but he doesn’t want to do it the way they did. He feels that spending hours behind an office desk is suffocating and the family business meetings are tedious; hence the idea of ​​creating a line of resorts under the umbrella of the Carey Corporation. He wishes to prove his worth to his father, his older brother, and to himself. When Justin and Sadie meet, he makes an offer to buy the hotel that belongs to the Harris family, but Sadie’s father turns him down and eventually Justin ends his relationship with Sadie. However, a year later things change for the Harris family at all possible levels, and Sadie turns to Justin, accepting the offer.

As soon as Justin and Sadie meet again, sparks reignite between them, but Sadie isn’t willing to fall in love with him again. However, she’s aware that Justin has to know he’s Ethan’s father, which she has hidden from him during the months that the hotel has been remodeling. The moment the secret is out, things change between them. Sadie fears that Justin will leave again like the first time he did and that this time he’ll take baby Ethan from her because he has the support of the Carey family (and the million$), so she remains cautious and somewhat distant. But the attraction between them is so strong and hot that they resume their romance in record time. The chemistry between Justin and Sadie is palpable and intense, as well as engaging; one of the best couples the author has created.

This book has a simple plot, despite having a complicated conflict, but exciting at the same time. Likewise, the author knows which buttons to press to keep the reader interested in the story. With an alluring lead couple, the book sells itself, especially since we’ve been getting a glimpse of Justin in the three stories that precede this one.

On the other hand, the secondary characters, the Carey and the Harris, bring their charm to the plot. We see young Careys already fulfilled and in love and Sadie’s parents bringing wisdom to her daughter. Sadly, we didn’t get to see much of Justin’s parents’ “Retirement Wars” compared to the rest of the series which, while it was a side story in all the books in the series, I was left wanting to know how Candace finally managed to get her beloved Martin to leave the reins of the company to his children and go travel the world with her, as he promised.

Brilliant writing, well-thought-out transitions, uncomplicated fast reading, and well-defined characters make One Little Secret a fantastic secret baby story. The fourth and final book in Dynasties: The Carey Center demonstrates why Maureen Child is one of the best authors of Harlequin Desire ever.

The man who got away is back

and a little surprise awaits him…

Single mom Sadie Harris couldn’t resist charming entrepreneur Justin Carey—and she couldn’t convince him to stay. And then she made the mistake of keeping her pregnancy a secret after they parted ways… Now he’s back to make a deal with her family—and meet his son for the first time. With emotions running high, Sadie and Justin soon cross the line from anger to passion…to possibly more. But will Justin stay this time?

Love triumphs in these uplifting romances, part of the Dynasties: The Carey Center series:

One Response to “REVIEW: One Little Secret by Maureen Child”