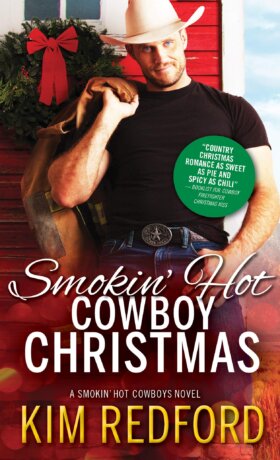 series. The Buick Brigade strikes again! There’s no stopping them.

Belle Tarleton has moved into the family ranch in Wildcat Bluff. She has lots of plans for the place. As CEO of the Lulabelle & You Company she has decided to throw a Christmas party at the ranch and envisions the event to double as an introduction to buyers and the media to her newly-named Lulabelle & You Ranch. She wanted to spruce up the ranch house for the party, but progress has been slow. Actually progress has been nonexistent. The new roof shingles, gutters and paint supplies are scattered on her front lawn. She hadn’t been able to find anyone to do the work – until Rowdy arrived. Rowdy was one hot cowboy! He insisted he was more than capable of doing what needed to be done. Thank goodness. Yes, she wanted to use the ranch for promoting her business but she also wanted it to be a place to support different creative arts. There’s only six weeks ’til Christmas and lots needs to get done. Belle knew she had to tamp down her attraction to Rowdy and get down to business. Which, as things turns out, also includes the Buick Brigade’s business.

Bert Two “Rowdy” Holloway, also known as the unluckiest cowboy in the county experienced his typical bad luck again. He drew the short straw in the county locals’ plan to discourage Belle Tarleton enough in her plans so she would want to leave Wildcat Bluff County. They thought her business would bring too much traffic and outsiders to their quiet county. In addition to being one of the county’s volunteer firefighters and ranch owner with his dad, Rowdy was quite skilled with construction and woodworking. But his job here at Belle’s ranch was to stall and delay getting the work she needed done. This was not sitting well with him. As time went on Rowdy felt worse and worse. He was falling for Belle and knew the deception had to stop. Will Belle forgive him?

This series takes place in a small county in West Texas. Usually the people all work together there to the benefit of all. Not really knowing all of Belle’s plans they assume the worst. I was happy to see that my faith in these characters wasn’t in vain. The whole group finally saw that they were wrong. You would think they would have realized their error sooner when the Buick Brigade welcomed Belle. The Buick Brigade is comprised of four elderly ladies who no one in the area wants to upset because they are so highly respected. I enjoyed the Buick Brigade’s antics and their means of communication. Carrier pigeons – only in Wildcat Bluff County!

Have yourself a Smokin’ Hot Cowboy Christmas

« REVIEW: Designs on Forever by Susan Carlisle
REVIEW: The Silence by Kendra Elliot »