The Dirty Truth by Winter Renshaw: After facing death head on a few months ago something major 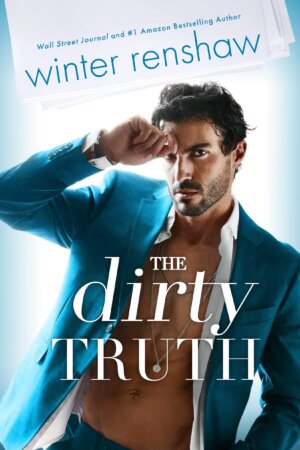 changed for Elle Napier, now not only does she find herself questioning if there is actually anything after death but most importantly she finds herself wanting to do something with actual meaning. So when her grouchy boss rejects her article and gives her an unrealistic deadline of 24 hours to produce a new piece for Made Man magazine something clicks in her mind, which is how she finds herself writing a scatting and very real exposé on non other than the man himself, her boss, West Maxwell and quitting all in one blaze of glory. Too bad this is not the last that Elle will be seeing of dear ole West now that she seems to have sparked something under her former boss…

West Maxwell has control of every aspect of his life, well every aspect aside from his teenage niece that just doesn’t seem to want to settle down in New York. If this wasn’t a change enough his favourite writer has upped and quit chewing his butt out in a blaze of glory no less! Being the resilient man that he has grown himself to be, West comes up with the perfect solution to still keep Elle in his life while trying to help Scarlett find her feet, Elle can play the role of Scarletts mentor of sorts… the only thing West could not factor in was his growing attraction to Elle or that he would actually act on it… now the man that has everything has to figure out away to prove to not only one lady that he is willing to change…

The Dirty Truth was everything!! After a very long time I have come across a book that really hit me the way this book did, there is just something about the way Renshaw captured the development of these three relationships while still keeping this a light read. I will go as far as to say this was a realistic grown up slow burn read that touched on very real and relatable issues. The Dirty Truth was quite easily one of my favourite reads this year!

I just loved Elle. She was real, raw and very relatable. I liked that her facing death not only changed her life but it did so in a good way, I loved that she used this shake up to make the change she had been to nervous to do for so long and in doing so found something so much more. I adored getting to see her bond with Scarlett and that she took time and effort to build a relationship with her even when Scarlett was being distant. Getting to see Elle and West together was pure magic, the chemistry between these two character was intense. I just loved getting to see their relationship grow and getting to see Elle unwrap the layers to West Maxwell.

“Behind the curtains of West Maxwell’s beautiful and privileged life is a dark and heavy portrait I wasn’t expecting.”

West was definitely the type of hero that you can’t help but love. His entire alpha jerk vibe was really just this shield and the more we got to know him the more we got to see that he was actually a softie that did want to get hurt. I loved seeing him with Scarlett and getting to see their relationship grow and really getting to see them learn to trust each other. But gosh did my heart just break for West and the guilt that he felt for his brothers death! I have to say West’s growth was largely thanks to Elle not giving up and pushing out of his comfort zone.

I just loved that West had been harbouring these hidden feelings for Elle for all these years without even knowing her, this was super cute. His entire made up scenarios of what life with Elle could have been like were a cute window into his soul and what his heart truly desired. I really liked getting to see them form this makeshift family and the epilogue only made my heart melt all the more!

I really liked that through all the deep topics of abandonment, death, self discovery and guilt Renshaw still managed to keep things light and enjoyable. I will say that the role of family played heavily in this book for both Elle and West. In West’s case it was about reconnecting with a part of his family and opening up, whereas for Elle and her family it was a mirror of what the Maxwells could have and what family really should be like. Good gosh the Napier’s were just hilarious, got to love this big family and the crazy that comes with them!

The Dirty Truth is a definite must read, this emotionally real and touching read will leave you wanting more of Elle and West’s story as they more on to the next chapter of their lives.

After a brush with death, I realize it’s time to make changes in my life. Big changes.

First, my job. I love being a journalist, but I hate my megawatt magnate boss, West Maxwell. When he demands I rewrite an article on short notice, I turn the tables on him with a scathing new column and quit in a blaze of glory.

But West isn’t about to let me go that easily, the jerk. He offers me an unexpected new position: mentor to his rebellious teenage niece. For some reason, I agree—I like helping people, but I’m also admittedly curious to glimpse the man behind the mogul.

However, I soon discover that my new assignment isn’t what I expected. As I learn about the private side of my enigmatic boss, I start to see the heart he hides behind his icy facade. The old Elle hated West…but maybe—just maybe—the new Elle can tame him.

« REVIEW: A Cinderella for the Prince’s Revenge by Emmy Grayson
Spotlight & Giveaway: West Side Love Story by Priscilla Oliveras »

One Response to “REVIEW: The Dirty Truth by Winter Renshaw”